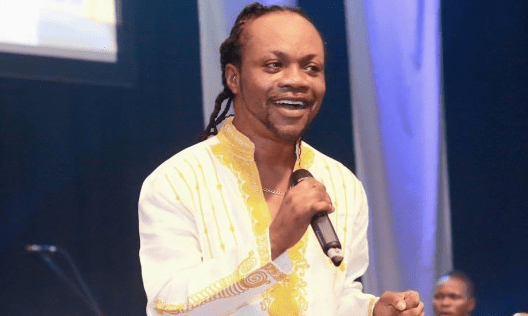 The song which is titled “Ofon na 3di Asem Fo” has been causing a lot of trouble online based on the heavy punches Lumba used in the song.

Per the lyrics of the song, a lot of netizens have speculated that Lumba is using the song as a sharp response to the allegations leveled against him by the CEO of Joy Industries, Dr. Manfred.

In the wake of these speculations, Lumba has come out to clear the air in an interview on his radio station, DL FM.

According to him, he had no one in mind when he was recording the song. He stressed that the song is the same one he promised to release some years back but “was waiting to release it at the right time”.

According to him, he had no one in mind because it is the same music he promised to release some years back but “was waiting to release it at the right time”.

In response to a caller on the show who accused Daddy Lumba of tagging someone, the legend stated that the song only expressed the feelings of many Ghanaians and was not a personal attack on anyone.

“And they must listen carefully if you are a musician who do music for yourself your music can’t be accepted by all so I think about what everyone is talking about. Or dive into people’s hearts and get to know exactly what they are saying. That is what I give to people. So it is not like I have tagged someone. Many people do the unnecessary, and when you take a good look at that individual who is doing the unnecessary you can see that he is even ugly,” Lumba said.

“Looking at the number of years I promise to release this song, it is now seven good years. This means that, the music was produced seven years ago. Therefore I have not tagged anyone in this song”, he added.

Listen to the song below…

The quotes in this story were culled from mynewsgh.com

Share
Facebook
Twitter
Pinterest
WhatsApp
Previous article
Ayra Starr Charges On Organizers Of Afrochella Following Her ‘Heavy’ Fall On Stage – Watch Video
Next article
VIDEO: Fancy Gadam Discloses Why He Is Not Performing On Any Of The ‘ December Shows’ In Ghana
- Advertisement -