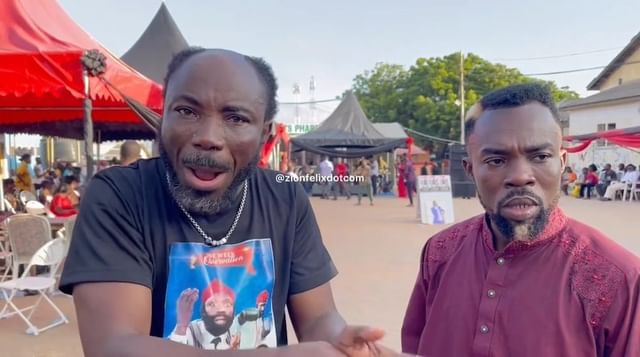 Ghanaian actors, Big Akwes And Quappiah at the one-week observation rites for the late comedian, Baba Spirit, held on Saturday, September 24, 2022, angrily bashed a band they hired for the ceremony.

In a video that is making rounds on social media, the two actors described one Odikuro Band as being very unprofessional.

According to them, even though they hired the services of the band to play from 6 am to 6 pm, however, the band decided to leave the venue where the ceremony was being performed earlier than before.

Big Akwes And Quappiah in the video angrily blasted the band for the manner they left the ceremony and advised people against hiring their services.

They also disclosed that the most annoying about how they left was their decision to leave when King Ayisoba was performing.

PHOTOS: Kumawood Stars Turn Up In Their Numbers To Commiserate With...