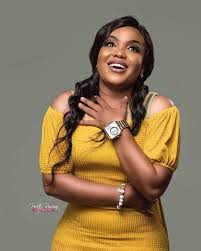 An election year in Ghana appears to a cocoa season for some Ghanaian celebrities, public figures and influencers.

While politicians are doing whatever they can to win more votes, prominent figures after studying their modus operandi have also adopted a strategy to cash in during this period.

As we gear towards the 2020 elections, Kumawood actress, Louisa Adinkra has revealed what will make her campaign for some of the political parties in the country.

Louisa told ZionFelix in an interview on the ‘Uncut’ Show that she is ready to campaign for any political that will pay her a huge sum of money.

She detailed that she will be working with others so the money should be hefty.

Louisa Adinkra stressed that once the party has a good policy that will be beneficial to the youth, she will gladly accept the money and start campaigning for them.

She believed in her capability of getting more followers and subsequent votes for any party that will seek for her service.