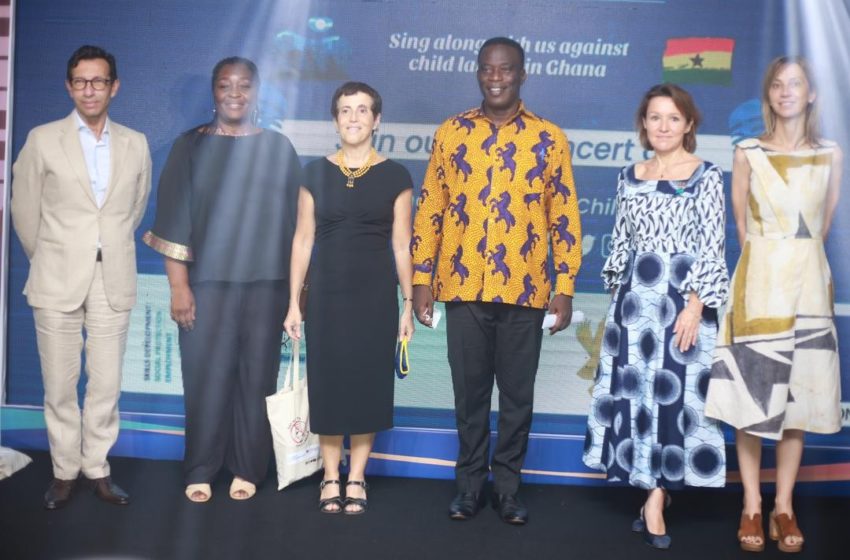 The European Union delegation in Ghana under the Ghana Employment and Social Protection has held a concert against child labour.

The concert which was held at the Alisa Hotels in Accra saw various performances from participants of the Song against child labour contest.

Addressing the audience and the media at the concert, the head of the European Union Delegation in Ghana, Ambassador Diana Acconcia, said the EU has been part and actively supported activities against child labour for years.

“In promoting our fundamental values, we have been supporting the fight against child labour for years in Ghana. We are very glad of the excellent partnerships we have with the Ministry of Employment and Labour Relations, the Ministry of Gender, Children and Social Protection and a number of national and international NGOs.” She stated.

Ambassador Diana Acconcia also reiterated the fact that not all work done by children can be  considered as child labour.

Speaking on behalf of theUnited Nations Children’s Fund (UNICEF)  Mrs. Anne-Claire Dufay, UNICEF Representative in Ghana offered some pointers and recommendations in the fight against child labour, notable amongst them was for Ghana as a country to invest in holistic and transformative solutions to support children’s right to education health and protection.

“First, it is smart to invest in durable, holistic, and transformative solutions that support children’s right to identity, health, protection, and education. Only 7 in 10 children are protected by a legal status, down from 8 in 10. We would like to invite the Government to waive the late birth registration fee to make it easier for families to obtain birth certificates. We also ask the private sector to ensure that their employees are above 18 years of age. And we encourage consumers to demand child-labour-free products,” she said.

READ ALSO: I Was Born A Muslim, But I’m Now A Christian – Joshua Of Keche Group Fame Explains

Mrs Anne-Claire speaking on behalf of UNICEF also commended the European Union Delegation in Ghana for their fight against child labour.

“On behalf of UNICEF, I commend the European Union for organizing this event and the Government of Ghana for its leadership and commitment,” she said.

The keynote speaker at the event, Hon Ignatius Baffour Awuah the Minister in charge of Employment and labour relations, thanked all who have played very important roles and have through various means supported Ghana to champion the fight against child labour. The minister admonished all the partners of development not to relent since the fight against child labour has not ended.

“We have done a lot that even with that, the task ahead continues to be very big. We have not won the fight yet, and it is going to take a lot of effort to be able to reach our goal of eradicating child labour by 2025, it therefore requires us to do more than perhaps we have been doing. Yes, the figures are not encouraging, worldwide, when you come to Sub-Saharan Africa, when you come to West Africa, when you come to Ghana, we cannot have a better story to tell as against our fight against the menace. But at least, through activities like what we are having tonight, we are bringing home to that person that doubted that child labour really existed, that yes, the menace continues to exist within our communities,” he said.

Patrons at the concert were treated to some good musical performances from artistes who are committed to the fight against child labour like Tsemi, Achiaa, Kwame Brenya, Kpodo, King Phronises and many more.

Victoria Michaels Is Champion Of The Environment...