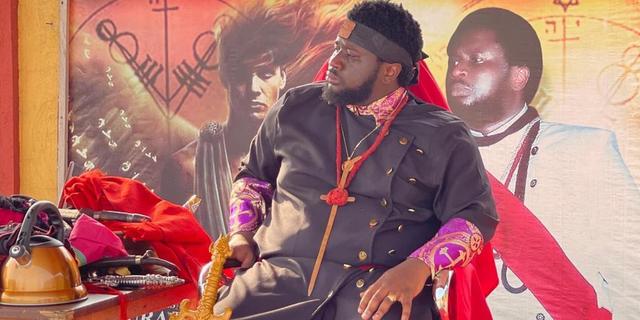 In a video sighted by Zionfelix.net, the leader of the Ajagurajah Movement narrated an incident that happened at a waakye joint.

Because of safety, he said he always buys the food he wants to eat himself—as he does not want to be poisoned.

Yearning for waakye, Ajagurajah said he went to a waakye joint to buy some, but he felt disrespected following the remark of a guy who was also in the queue.

READ ALSO: My Song For The Black Stars Will Make Them Play In The World Cup Finals – Dr. UN Brags

After the waakye seller saw him, she decided to serve him but this guy opposed, saying they have been in the queue for a long time—so the woman should not do that because Ajagurajah is a pastor.

He added that the guy further stated that they won’t allow anyone to scare them.

Following his remark, Ajagurajah claimed he bought all the waakye and left.

He is questioning if he was right or wrong.

Watch the video of his statement below.

Share
Facebook
Twitter
Pinterest
WhatsApp
Previous articleMy Song For The Black Stars Will Make Them Play In The World Cup Finals – Dr. UN Brags
Next articleHarvard Kennedy School Finally Reacts To Dr UN’s Claims That He Graduated From There
- Advertisement -