Actress Tracey Boakye has in the last few years seen a lot of blessing come her way. From the establishment of her own production house, through to the opening of her beautiful mansion and the recent ones which were her Short Code bar and lounge and sharp deliveries, one can only appreciate the efforts of the mother of one.

Even though many people have suggested that the award-winning entrepreneur has had it very easy and as such the opening of this businesses is no news, actress turned evangelist, Gloria Kani, a very close confidant of Tracey Boakye has revealed that it has never been easy for the Shakira Movie Productions boss.

Speaking at the special ceremony Tracey organized recently to put smiles on the faces of widows during the mother’s day celebration, Gloria Kani revealed that her friend used to eat common gari and pepper when she was pregnant.

The radio evangelist stressed that it was not as if Tracey had the desire to eat such food as it is normal with pregnant women but she ate it because there was no money to buy the food she wanted.

Gloria used Tracey’s story to encourage all the mothers who were at the celebration and all the women out there to ensure that they never give up on their dreams and their children.

Watch the video of Gloria Kani making this revelation below: 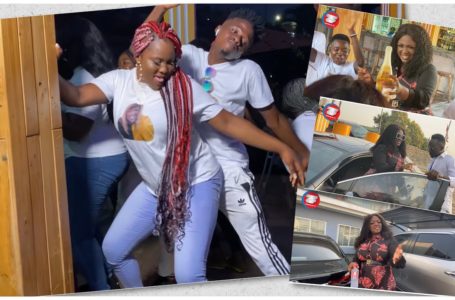