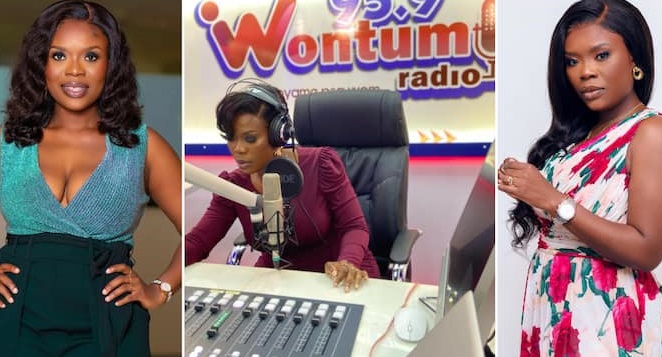 It has been a long wait but finally, zionfelix.net can report that celebrated radio and TV personality, Deloris Frimpong Manso affectionately called Delay has joined the newly opened radio station of Ashanti Regional party chairman of the ruling NPP in Accra, Wontumi Radio.

Delay‘s move to the radio station was widely reported some weeks ago after she was seen in videos hosting a show on the station after being off the radio for over six years.

Following the viral reports, Delay quickly came out to debunk and state that she didn’t have any intention of going behind the console again as a presenter because she was very busy building her own businesses now.

Soon after Delay’s release, Chairman Wontumi was also seen in another video trying very hard to convince Delay that her return to radio, specifically, Wontumi 95.9 Mhz was not up for any form of discussion or delibration so she should start working as soon as possible.

Well, it appears that Chairman Wontumi‘s pressure on Delay has worked because from a post sighted on the official Facebook page of the new radio station, the award-winning presenter has accepted to be the host of the late afternoon drivetime show of the station dubbed ‘Moving Home With Delay’.

The date for the start of the show is yet to be communicated to the general public, but we are very confident that it will be sooner rather than later.

Congrats to Delay and the whole Wontumi Multimedia Group.