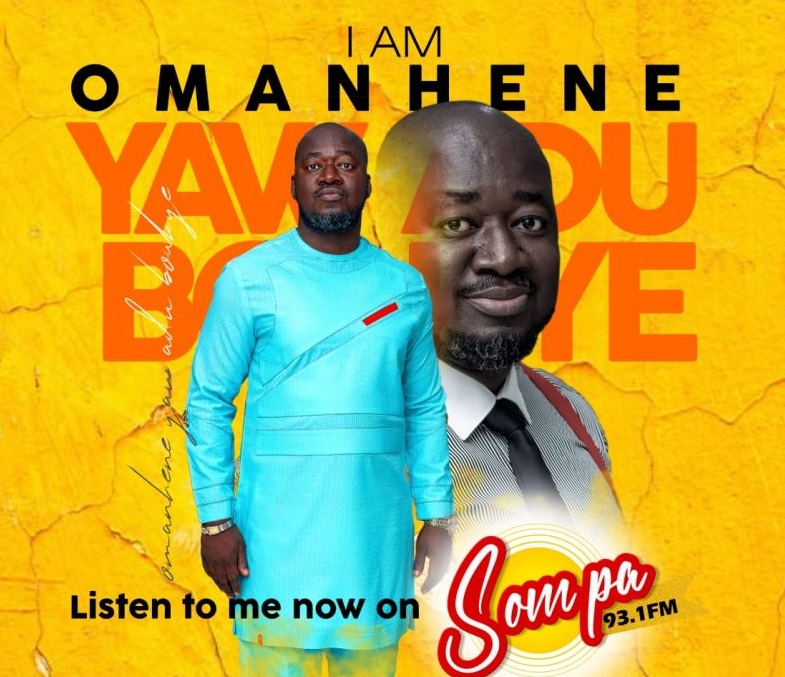 Some discerning listeners of the newly opened Kumasi-based radio station, Sompa Fm (93.1) are very confused as to the real owners of the station.

The most popular names that have popped up among the audience include Member of Parliament for Suame Constituency and the majority leader in Parliament, Osei Kyei Mensah Bonsu or business mogul, Nana Achamfour or owners of 2 pm express or Tabeaa herbal company.

READ ALSO: Sarkodie Reacts After American Rapper, Chance Said He Is The Only Top Act He Has Not Met After He Came To Ghana

The confusion and allegations came at the back of the shocking poaching of some renowned and seasonal journalists in the country to the station in the shortest period of time including, Political Talk Show host, Omanhene Yaw Adu Boakye, Sampson K Nyamekye, Emrantehene, Sometymer Oto Acheampong, Ante Naa, Kofi Appiah, and others.

Out of this list, Emrantehene aka Man88 has confirmed the news and Omanhene Yaw Adu Boakye has also confirmed his signing with the new station on his official Facebook page. The rest has either refuse to comment or talk about it.

Meanwhile, management of the station has called on the general public to disregard the unfounded allegations in the public domain that the promising station belongs to any of the names mentioned especially Hon. Osei Kyei Mensah Bonsu because the station is sited at Suame and has some political dimension.

According to them, the public should focus on the good programs the station is bringing on board in shaping the national discourse and promoting socio-economic development as with time, the true owners will be known.

”Kyei Mensah Bonsu, One Achamfour, Tabeaa herbal company and owners of 2M express are not the owners of Sompa Fm as is alleged. Time will tell for you to know the true owners of the station but currently, our major focus is to build a solid brand. We assure the general public to expect something different and great from the good content the station is about bringing. We have quality program outlines for our discerning listeners and viewers on all our social media platforms. We are determined to serve our people well”.

Moreover, the management appreciated the huge audience and attention the station is getting from the public in its first week of operation in the garden city.

Management took the opportunity to entreat listeners and potential sponsors to channel the advertisement of their product to Sompa Fm (93.1) for better promotions and marketing moving forward.

However, non of the alleged names mentioned above have come up to disprove the allegations leveled against them as being the owners or financiers of fresh in the town radio station. Another clue that could possibly tag Tabeaa herbal company to this rumor is the fact that Tabeaa recently closed down its television station called Trust tv some months ago and is said that they did this to switch to the radio which is Sompa 93.1fm.

What we can tell for a fact is that whoever is behind the station is definitely filthy rich as it is a rumor that some of the presenters are alleged to be taking an unresistible mouth-watering package.

Share
Facebook
Twitter
Pinterest
WhatsApp
Previous articleSarkodie Reacts After American Rapper, Chance Said He Is The Only Top Act He Has Not Met After He Came To Ghana
Next articleShatta Wale Bl@sts Haters As He Finally Makes Peace With Joint 77 – Watch Video
- Advertisement -