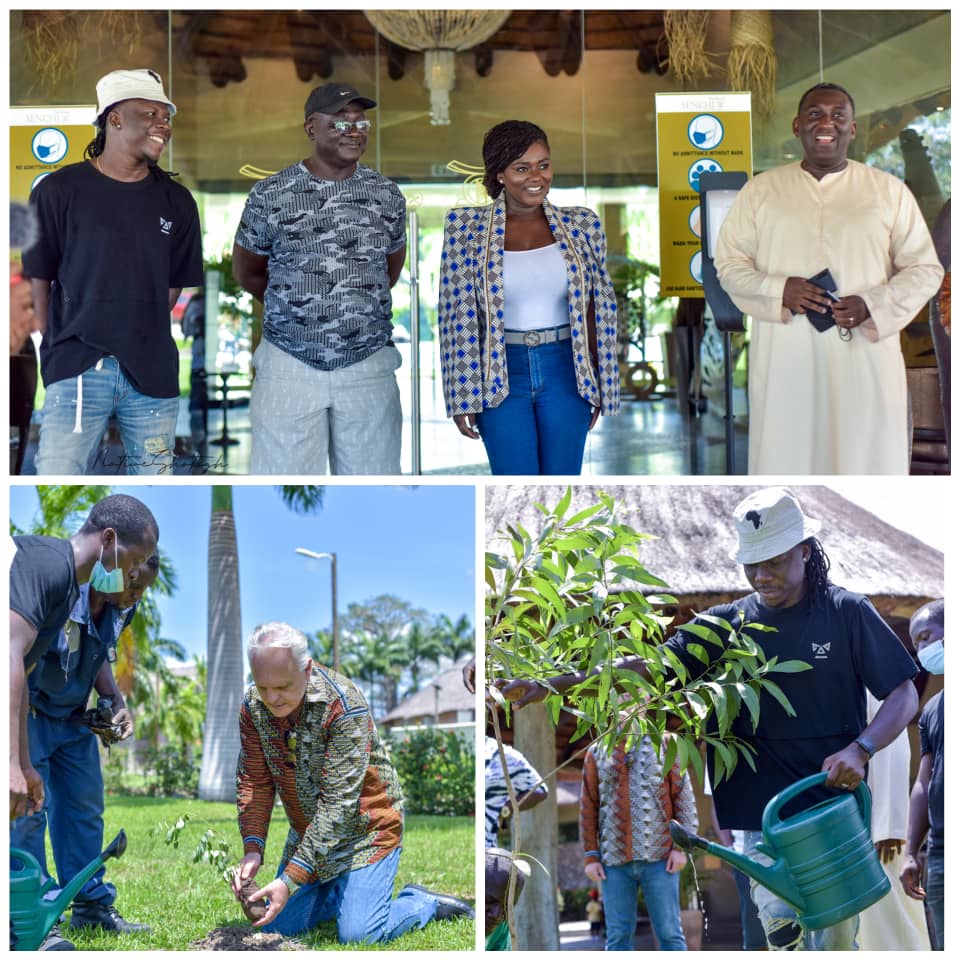 Reggae and Dancehall musician Livingstone Etse Satekla known in showbiz circles as “Stonebwoy” and Ghanaian British Entrepreneur, Dentaa Amoateng, (MBE), joined the management of the Royal Senchi Hotel on a tree planting exercise in support of the Green Ghana Project.

The Green Ghana Project, an initiative of the government aimed at planting at least five million trees across the country, kicked off last Friday with various organisations and individuals partaking in the exercise.

Stonebwoy who was on holiday with his family at the hotel took part in the symbolic exercise undertaken at the premises of the waterfront resort and the courtyard of the Akwamu Royal Palace on June 13 at Akosombo, Eastern region.

A total of 17 trees of various species which were earmarked for planting, is expected to add to the hotel’s reserve of natural as well as man-grown flora for beautification and eco-preservation purposes.

In a brief speech, Stonebwoy, a climate change ambassador, endorsed the government’s initiative, highlighting its importance in helping undo the effects of harmful practices on the environment.

“My family, my team, and I feel very honoured to be hosted by Royal Senchi and offered the opportunity to do my bit in this tree planting initiative,” he said, adding: “As a climate change ambassador, I believe so much in giving back to the environment what we take from it, and so my being part of this exercise is very intentional and only reaffirms my commitment to it,” the multiple award-winning artiste said.

He also stated the medicinal value among other life-sustaining benefits of trees, saying the initiative ought not to be viewed with political lenses but embraced by all to save the environment.

“We need to plant more trees as we use them for medicine, shelter, and so on. Let’s not politicise this one, we need the trees,” he stated.

READ ALSO: Shatta Wale Vs Arnold: Popular DJ Bemoans Over How Talents Shove Their Progress In The Face Of Those Who Promoted Them

The world-class artiste in his speech also touched on the need for Ghanaians to preserve the country’s natural endowments and patronise domestic tourism to help grow the sector and the local economy.

“I am one of the most travelled outside the country and have seen what other countries do with their natural resources. I have therefore come to realise that we need to take care of what belongs to us and promote our own more than we have done in the past,” he remarked.

For his part, the General Manager of the Royal Senchi, Mr Gerard Schraven noted that the hotel’s commitment to environment-friendly practices resonated with the president’s initiative, and as such occasioned the exercise.

After spending some time afield, Stonebwoy and his entourage led by the hotel’s management paid a courtesy call on the overlord of the Akwamu state, Odeneho Kwafo Akoto III, who praised the group for the exemplary undertaking.