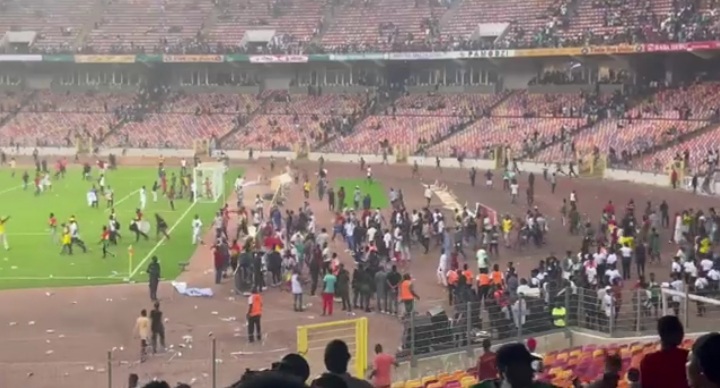 Nigerian fans in the Moshood Abiola Sports Stadium in Abuja has taken to rioting to express their displeasure against their loss in the just ended World Cup qualifiers.

The Nigerians lost their spot in the upcoming World Cup after they were held to a 1-1 draw in their own backyard by the Black Stars of Ghana.

The first leg of the encounter saw both teams play a goalless draw last week in Kumasi.

The Nigerian fans are however displeased about their inability to qualify hence their resort to riots.

According to reports, property has been destroyed in the stadium.

According to a TV3 sports journalist, Yaw Ofosu who was in the stadium, some Ghanaian football fans were attacked in the stands.

They were subsequently moved to the football pitch to protect them from more attacks from irate Nigerian fans.

Yaw Ofosu said he had to remove his press jacket to prevent attackers from identifying him as a Ghanaian.

He tweeted a photo from their “shelter” provided by Nigerian BBC sports journalist Oluwashina Okeleji.