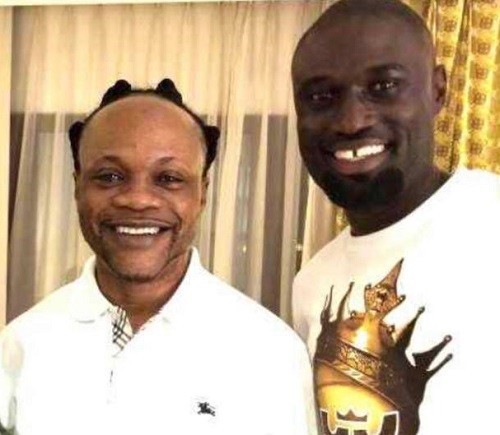 Roman Fada, the manager of popular Ghanaian musician, Daddy Lumba has reminisced his first encounter with him.

In a post sighted by Zionfelix.net, Roman Fada revealed he was sceptical when Daddy Lumba called him via phone.

When the renowned musician called him and introduced himself, he quickly ended the call—thinking that someone was pulling a prank on him.

READ ALSO: Delay Is Not My Friend, I Was Shocked When I Saw Her Calling My Phone – Ohemaa Woyeje

Persistently, Roman Fada recalled Daddy Lumba placed another called after he ended the second one as well.

But he gave the phone to his uncle after he told him that someone wants to pull a prank on him.

Interestingly, his uncle confirmed that it was indeed Daddy Lumba and he apologized to him when he took the phone from his uncle.

Roman Fada narrated what happened afterwards in his lengthy post below; kindly read:

The story behind the picture: part 1

On 12th February 2007, between the hours of 9pm n 11pm,my phone rang couple of times n I answered n heard a voice…. good evening Roman Fada n I responded good evening sir. N de caller said this is Daddy Lumba, I call to say thank u, before he continue I drop de call and he called again n said boss is this Roman Fada n I replied “ masa me pe rough wati, anadwo wei aden ne rough yee “ pardon my twi even tho I’m an Ashanti. The call came again for the 3rd time n I handled de phone to my uncle n said , “Wofa obi ye me rough”. My uncle spoke to him n said Fada eye Lumba ooo. I grabbed the phone n said ooh sir I’m sorry ooo so sorry n he responded by saying that’s ok…. And de conversation continued n he said I actually called u to say thank u for playing my songs almost every day when u go on radio. I have been told everything and decided to call to say THANK YOU. N he asked me, PLEASE WHAT DO U WANT OR NEED SO I DO FOR YOU? U really wanna know the ANSWER?

I just RESPONDED DADDY I DO NOT NEED OR WANT ANYTHING I just love u keke.

But he said NO! NO!!SAY SOMETHING, n I said ok I will be happy to interview u n he asked when do u want it n I said a day after tomorrow which was 14th February 2007, Valentine’s Day. N he said no worries is that all, n I said yes sir. DL said ok once ur show start from 2pm – 4pm on Radio Mercury will be at the station before the time. Then he told me to announce that he will be on my show on 14th vals day n I told him no no no, how can I say I will interview u when gurus are in oseikrom. So he said ok when u go on radio I will call on phone and announce my coming on ya show. Two days I couldn’t sleep, Hahahah, 14the February 2007 was Wednesday , ladies n gentleman there came de adorable CHARLES KWADJO FOSUH in de premises of radio Mercury n was like “ oh my God !!!!! And when I set my eyes on him (DL) for the first time, I felt as if an African beautiful Roman Sister with a soft palm touching and rubbing my body with florida water ….to be continued

U see how my face dey look like “ agushie” Na who dey preach n who dey interpret.