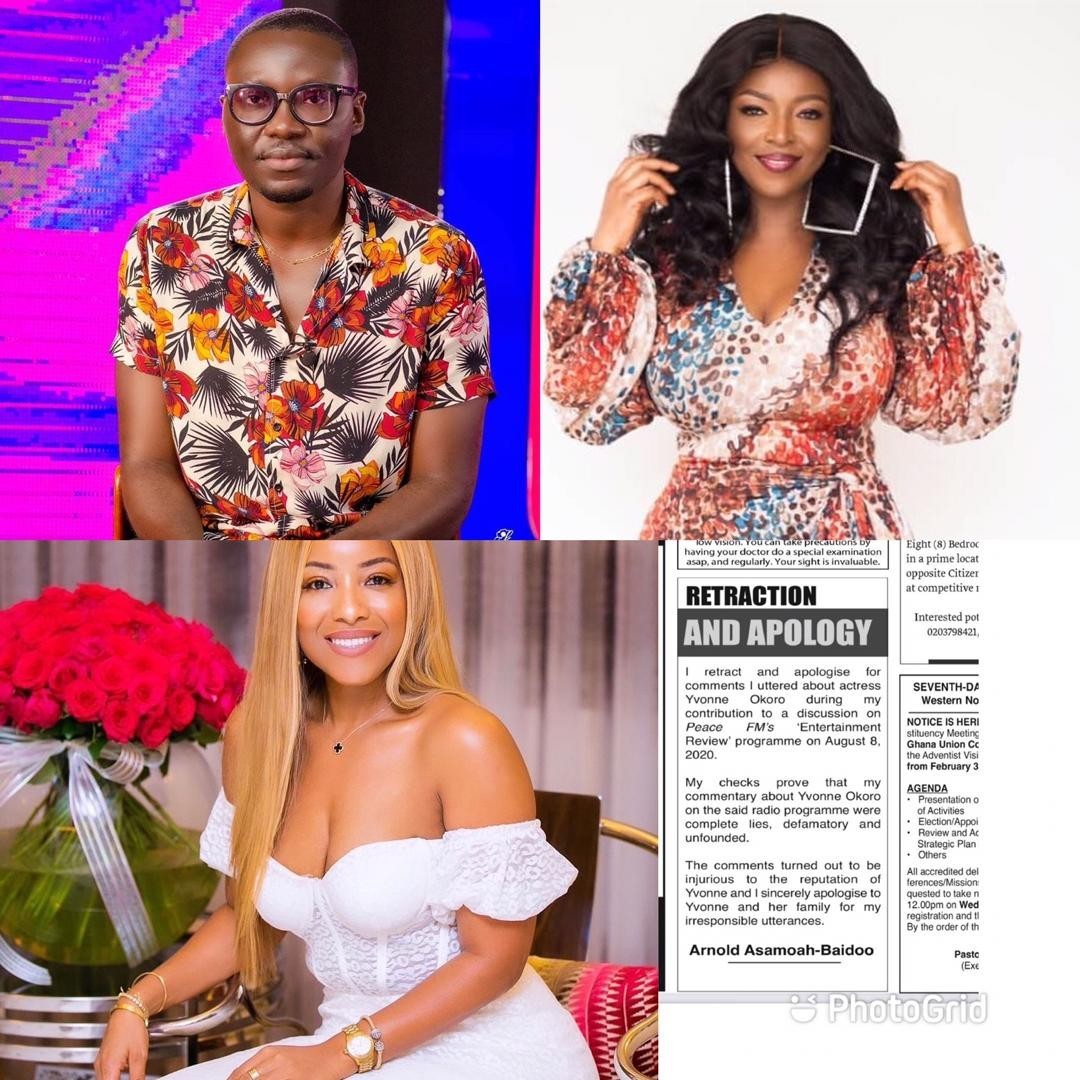 Showbiz pundit, Arnold Asamoah Baidoo, has admitted to lying in his recent claims that actresses Yvonne Okoro and Joselyn Dumas fought over a ‘big man’.

He has therefore retracted and rendered an unqualified apology over the statement, indicating he acted ‘irresponsibly’.

It may be recalled that Arnold while speaking on Peace FM’s Entertainment Review programme hosted by Kwasi Aboakye on August 8, 2020 stated without any caution that a certain ‘big  man’  once bought a Mercedes Benz and Range Rover Evoque for Yvonne Okoro and Joselyn Dumas after  one of them introduced the other to the ‘big man’.

READ ALSO: Delay Is Not My Friend, I Was Shocked When I Saw Her Calling My Phone – Ohemaa Woyeje

The ‘big man’, he claimed, bought a bigger car for the actress who was introduced to him and that led to misunderstanding between the two celebrated actresses.

But he has made a u-turn to say he lied in his claim. He didn’t cross-check his facts before making those comments.

“I retract and apologise for comments I uttered about actress Yvonne Okoro during my contribution to a discussion on Peace FM’s Entertainment Review programme on August 8, 2020.

My checks prove that my commentary about Yvonne Okoro on the said radio programme were complete lies, defamatory and unfounded.

“The comments turned out to be injurious to the reputation of Yvonne and I sincerely apologise to Yvonne and her family for my irresponsible utterances,” Arnold said is his retraction statement to Yvonne Okoro.

Share
Facebook
Twitter
Pinterest
WhatsApp
Previous articleDelay Is Not My Friend, I Was Shocked When I Saw Her Calling My Phone – Ohemaa Woyeje
Next articleRoman Fada Reminisces His First Encounter With Daddy Lumba
- Advertisement -