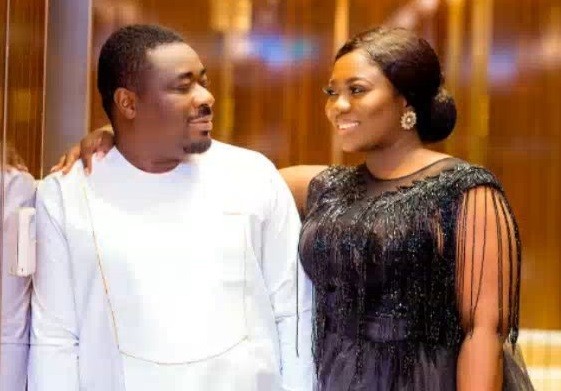 Musician turned radio personality, Quophi Okyeame who happens to the husband of Angel FM/TV director, Stacy Amoateng has taken to social media to lay curses on the heads of all the people who are scheming to shame his wife.

Quophi Okyeame‘s h0t curses follow a series of wild allegations being leveled against Stacy Amoateng by one lady known as Adu Safowaa and others on social media.

READ ALSO: Tiktok Star, Asantewaa Gushes Over Her Dad, Koo Fori On Social Media And Announces She Has Bought A New Car (+Photos)

According to his post on Instagram sighted by zionfelix.net, anybody who is a part of the conspiracy to shame his wife for no wrong will know no peace.

The host of Angel FM Accra drivetime show didn’t spare the innocent kids of these schemers.

‘I curse the mouth that conspires against you in the grand scheme of shaming you to their fourth generation.Anyone connected to their grand scheme will know no peace.They will have men but never husbands.They will have women but never wives.They will bring forth their kind and they will be destroyed by their own blood.They will know no peace.The rise of the sun will be the beginning of their pain and the night will be the end of their Joy.If there is a God that I serve and he hears me and speaks to me,they will be beggars,they will hunger and thirst and the world will bear witness and learn from from their foolishness.May their Favour and Grace be taken,their prayer be noise to the Angels that deliver them.May the justice spirit of Yaweh watch over these words and see it to the latter.I seal this curse with the blood of Christ which is still fresh on the alter of sacrifice.’

Tutu Was Not Killed By Any Actor, His Mum Was Pressured To Lie – Oboy Siki Goes Wild

Tutu Was Not Killed By Any Actor, His Mum Was Pressured To Lie – Oboy Siki Goes Wild