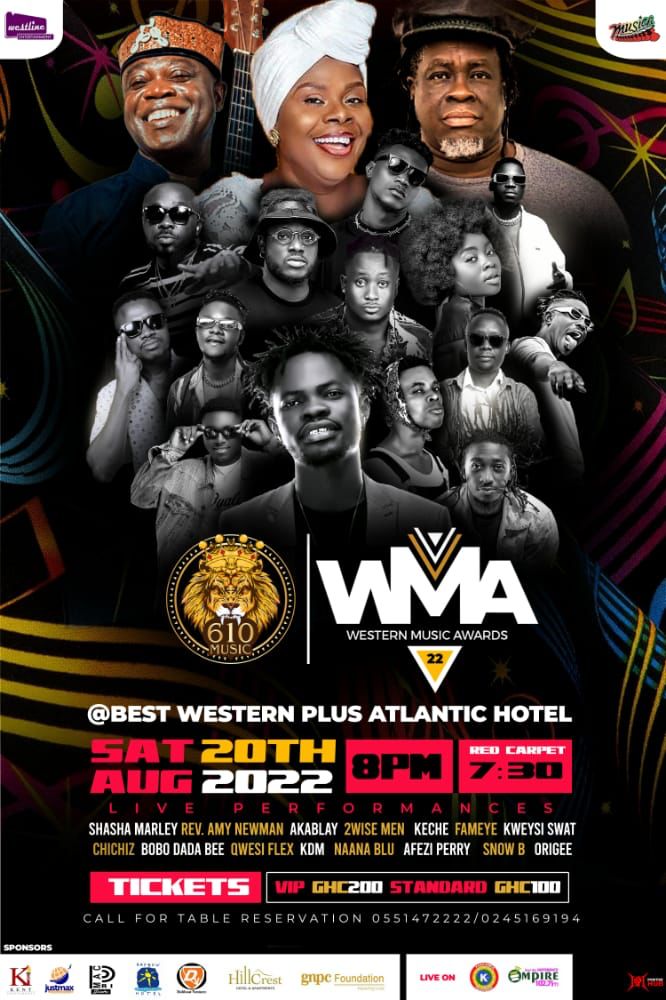 The sixth edition of 610Music Western Music Awards is set for Saturday, August 20, 2022, at the Best Western Plus Atlantic Hotel in Takoradi.

The awards which is sponsored by 610Music, a California-based record label aims at celebrating Artistes and Creative Arts stakeholders with Western Region lineage. Westline Entertainment, the organisers have intimated that, this year’s edition will have a special performance dedicated to the memory of A.B. Crentsil, a lifetime achievement recipient of the awards who passed away on July 13, 2022.

A total of 30 categories will be won by nominees with the ‘Artiste of the year’ as the ultimate category. A Creative Arts player with over 15 years of relevance in the industry will also be honoured with the ‘Lifetime Achievement Award’ on the night.

READ ALSO: “The Baton Has Been Transferred Successfully” – Hammer Says As He Cites Example Of New Ghanaian Artistes With An International Presence

“This year, there are 5 new categories added to the already existing 25 categories of the awards, making it a total of 30. The ‘Western Diaspora Musician,’ ‘Most streamed Artiste,’ ‘Instrumentalist of the year,’ ‘Songwriter of the year’ and ‘Best Blogger/Promoter’ categories are the new additions,” Nana Kwesi Coomson, the Public Relations Officer for 610Music Western Music Awards hinted.

According to Mr. Coomson, “With the direction of the awards this year, 15 Artistes from five genres have been billed to perform this year. Mrs. Amy Newman, Shasha Marley, Aka Blay, 2Wise Men, Keche, Fameye, Kweysi Swat, Chichiz, Bobo Dada Bee, Qwesi Flex, KDM, Naana Blu, Afezi Perry, Snow B and Origee are the listed Artistes this year.”

“With the tagline ‘Celebrating our Music,’ the awards will be broadcast on all social media handles – Western Music Awards Ghana on Facebook and on Youtube and that of affiliate media stations, with Empire FM in Takoradi and Kankanta TV transmitting it live on air,” the PRO noted.

Share
Facebook
Twitter
Pinterest
WhatsApp
Previous article“The Baton Has Been Transferred Successfully” – Hammer Says As He Cites Example Of New Ghanaian Artistes With An International Presence
Next articleWestern Music Awards: I Deserve To Win The ‘Artiste of the Year’ – Aya RamzyB
- Advertisement -