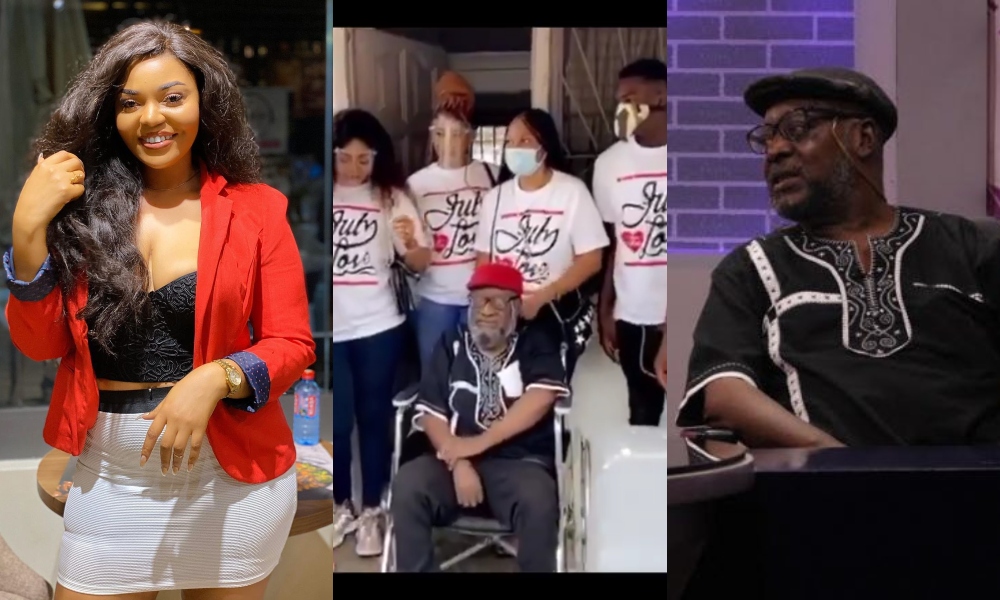 Actress Gifty Asante together with her team, July For Love, have reached out to experienced actor Kojo Dadson and have donated some things to him.

The team did not go there empty-handed, as they were seen to have donated some gift items ranging from bags of rice, drinks, bottled water and some toiletries.

The Ghanaian actor known in popular series ‘Home Sweet Home’ has finally gained his speech after suffering a stroke and has not been all forgotten as top Ghanaian model and actress Gifty Asante and her team pays Him a surprise visit.

In a video sighted by zionfelix.net, the actress Gifty Asante was heard saying:

“We decided to pay you a visit after I saw you on the internet and we wanted to show you some love because you did not look so strong again”.

In response to the love shown him the veteran actor responded and indicated that he was pleased to have received the support.

“Today is Wednesday… About a week ago, the director of Home Sweet Home, Emmanuel Appiah, came through with his wife… In a few weeks’ time, we will be shooting Home Sweet Home,” Kojo Dadson said.

One would have thought that after suffering from a stroke the Home Sweet Home actor will not act again, but he had a surprise for all his fans and Home Sweet Home lovers.

” so those of you who are Home Sweet Home lovers, be sure that in a few weeks’ time you will see me doing my own thing”.

Kojo Dadson is a Ghanaian veteran actor, producer, composer and director who has contributed immensely to the growth and development of the Ghanaian Movie Industry.

The Ghanaian actor was diagnosed with stroke in 2012. This affected part of his face hence impaired his speech and confined him to a wheelchair.

Some Ghanaian Celebrities Fail To Show Up For Interviews After Flyers...