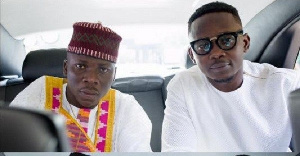 Blakk Cedi, former artiste manager of dancehall crooner, Stonebwoy, was present at the studios of Asaase Radio to show support and loyalty.

The Asaase SoundClash was a semi-virtual concert put together by Asaase Radio with a primary focus on a musical battle between Shatta Wale and Stonebwoy.

The event lived up to expectations with a considerable number of streams on major platforms. The two artistes also put up a show that caught the fancy and attention of the overzealous fans.

However, the highlight of the whole event was the presence of Blakk Cedi in the crowd to show his support to Stonebwoy, who was the favourite of the fans and arguably the winner.

Blakk Cedi was captured nodding to the ‘Strength and Hope’ song of Stonebwoy with a perfect display of loyalty to dispel claims that the two are not in good terms.

Blakk Cedi is currently the artiste manager of Kelvyn boy and OV, both used to be under the signature of the BHIM Record label when he was the manager.

Stonebwoy Says He Is Ready To Render His Musical Services To...