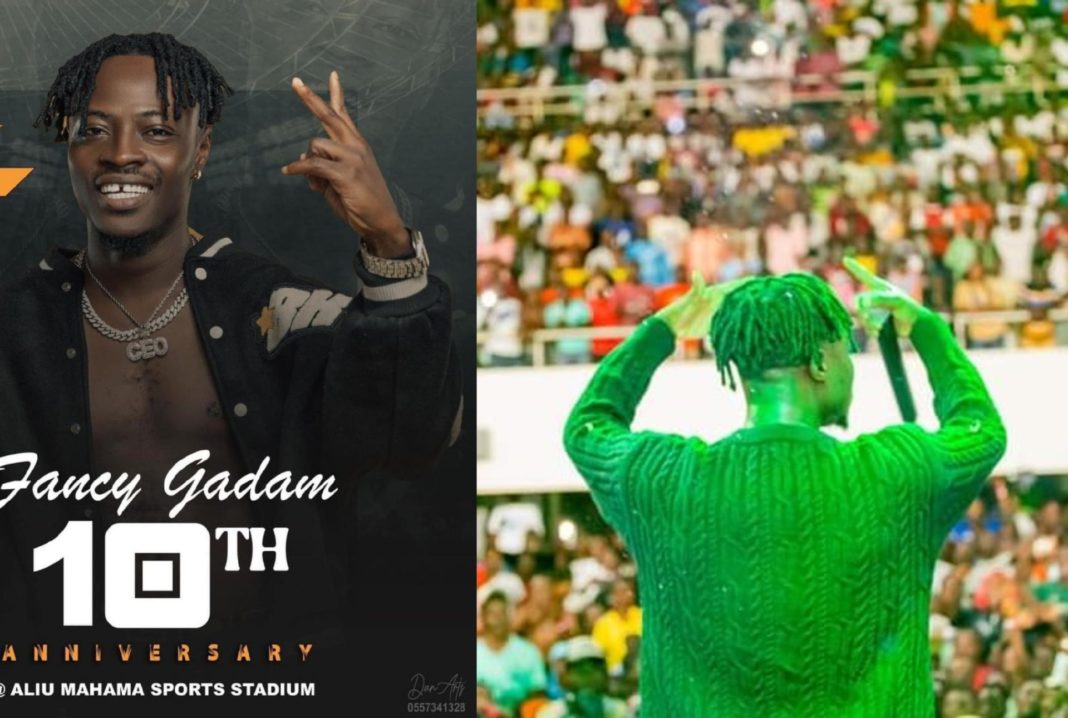 Ghanaian musician, Fancy Gadam, has yet again set another record for himself as an artist.

The popular musician, who is based in Tamale, has consistently drawn a large crowd of fans to his concerts, and at every point in time, it beats the imagination of everyone.

READ ALSO: Sometimes I Slap Men Who Touch My Big A$$ When I Am Walking In Town – Actress Mercy Little

As he celebrated his tenth anniversary in the music business at the Aliu Mahama Sports Stadium, Tamale over the weekend, the number of people who turned up to watch him was mind-boggling.

The central area of the Tamale Sports Stadium and some of the stands were filled to their capacity as fans and music patrons trooped in to have fun.

READ ALSO: Amerado lists his top 5 rappers and how they inspired his new album

Fancy Gadam at the concert also gave back-to-back performances of his various hit songs, plus other performances from some of his colleagues in the industry, including Hajia4Reall and FBS.

In an Instagram post after his beautiful celebration, Fancy Gadam showed his appreciation to the great musicians who paved the way for him and to his fans for their unflinching love over the years.

“Last night the industry celebrated me .. I want to thank the seniors and the legend in the game for their massive support and to show lots of gratitude to the youngsters for their support . I am still looking through my elementary dictionary to find the best dictions to thank the media and my lovely fans for always been there for me .. thank you all for this greatness I can’t thank you enough .. I love you,” he wrote.

Watch some of the videos from the concert below…