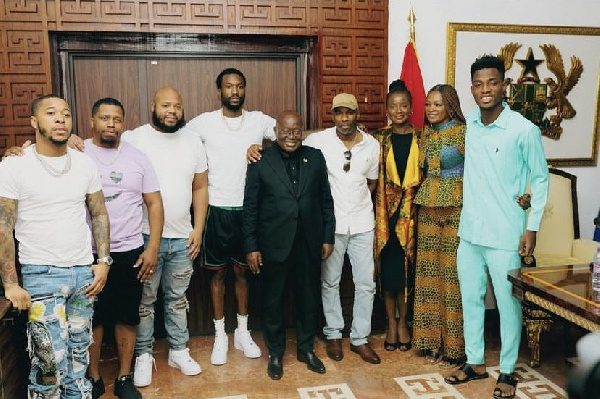 Nuong Faalong, a Ghanaian journalist, has recounted how she was stopped from filming a story in front of the Jubilee House some years ago because it was unlawful.

According to her, some years ago, the security team stationed at the Jubilee House came out quickly when they saw her trying to film a report and took her inside the Jubilee House where the video the little they had recorded earlier was deleted.

Her revelation made on Facebook comes at the back of social media reaction to a video released by American rapper, Meek Mill, which was allegedly shot inside the Jubilee House.

The rapper was at the Jubilee House in December 2022 when he paid a courtesy call on the President of the Republic of Ghana, Nana Akufo-Addo, and also picked up his phone that got stolen and later retrieved by the police.

Apparently, he capitalized on the opportunity of being at the seat of Ghana’s government and shot a video that was released on Sunday, January 8, 2023.

Even though it is currently unclear if he was given permission to shoot such a video and release it on social media, the former TV3/3FM reporter expressed shock that the American was given such preferential treatment over the citizens of the country.

She also reiterated that the manner a lot of Ghanaians are treated in the country is a major reason why they always speak down on the country when they get the opportunity.

Many years ago, a Camera Man called Francis and I grabbed some equipment and headed out looking for the perfect spot to shoot a story.

We stood at the Afrikiko intersection, turned around and shot a few ’stand uppers’. It didn’t look good enough, the story was political so we inched closer to Jubilee house , I stood on the grass with Jubilee behind me in the background and we started to roll …. BOOM!!!

Security came running out real quick, grabbed our equipment, took us inside , we went through all kinds of security processes on the compound , finally went to see the head of Security and then Director of Coms Eugene Arhin who cleared us to leave after we promised to desist.

Our videos had been long deleted.

I never mentioned it because I was not mad, I am certain everyone involved was just doing their job.

Why am I saying it now?

Meek Mill be owning my country pass me.

This week I have seen a few posts questioning why foreigners hype Ghana while Ghanaians put Ghana down, some of the posts went further to say “we are our own enemies” , “nation of whiners and complainers“, nye, nye, nye, nye. The Ghanaians who complain deserve to be heard, nobody hates Ghana just because they do not agree with your spin. You don’t get to label them and drag them for props.

If you treat a guest better than your children, of course they will speak better of you than your kids. But is that what makes you a good parent?

If foreigners are quickly elevated and given all kinds of access over and above local woman like me, of course they will go and blow your Trumpet louder. Our experience of the country are different!

This ‘lure’ package allows them to run riot without restrictions or repercussions. They get access and sweetheart deals. We get the rough edges.

Frankly when some of them hype the country, Ghanaians cannot even relate.