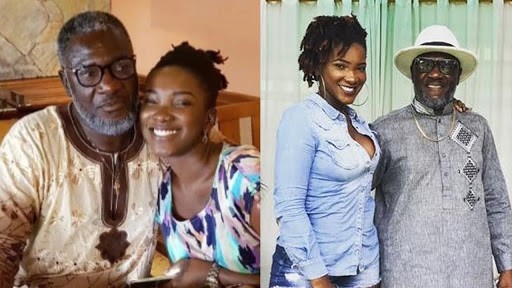 Skinny claimed in a video that Ebony was killed by her hometown gods for engaging in lesbianism.

Reacting to this in an interview Zionfelix.net monitored on Kingdom Plus FM, Mr Kwarteng stated that he who pushes him will pay the price.

READ ALSO: MOG And Shatta Have Raised A Big Issue That Needs To Be Addressed – Hammer

He told the host, Fiifi Pratt, that Skinny’s statement was disgusting.

Nana Opoku Kwarteng, otherwise known as Starboy Kwarteng, was shocked about the decision of Pope Skinny to spew lies about someone who is dead for about three (3) years now.

He questioned if Pope Skinny can come out with any prove if he takes him on.

READ ALSO: You Can Hate Kuami Eugene But He’s The Go To Guy For Hit Songs – Popular Comedian To Guru

Starboy Kwarteng urged the USA-based Ghanaian musician to apologize through the medium he used to make this assertion about Ebony.

He further advised him not to use his late daughter for attention.

Watch a video of how Starboy Kwarteng reacted.

The Video Is Fake – Pope Skinny Speaks About Beyonce And...