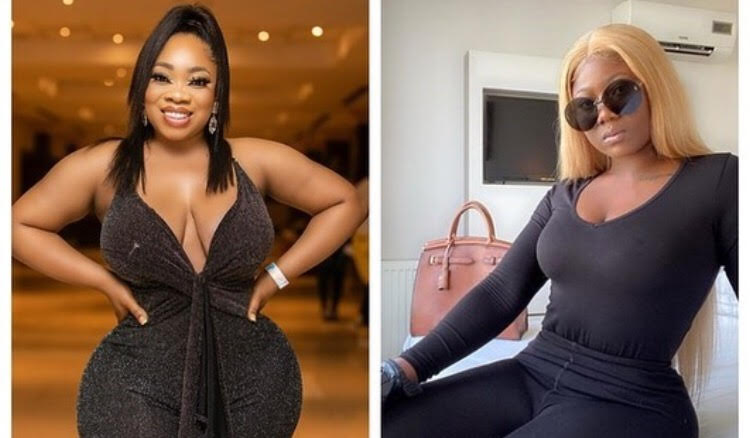 Ghanaian actress, Salma Mumin has said Moesha Boduong is no more her friend.

Many people thought they have settled their differences after their beef over ‘artificial butts’ but it has emerged they still have scores to settle.

Speaking in an interview with ZionFelix on the ‘Uncut’ Show, Salma explained she doesn’t want to associate herself with Moesha because of a post she made which was subsequently published by an entertainment news portal.

According to her, Moesha’s allegation that she has enhanced her butt and probably took inspiration from her after she and her cohorts laughed at her did not sit well with her.

She recounted how Moesha clarified Sandra Ankoboiah’s name from a supposed shade that was targeted at them over butt surgery—but she refused to clarify her name which meant she was the subject in that post.

Not happy about her post, Salma thought it wise to unfollow Moesha Boduong on social media just to save her from troubles.

READ ALSO: President Akufo-Addo Lifts The Limit On The Number Of People Who Can Attend Conferences, Workshops And Award Events

Salma Mumin revealed all these happened after they have met at an event and had a good time.

She added that she will extend pleasantries with her when they meet but she won’t follow her on social media to see such stuff she won’t be happy to see.

My Ex-Boyfriend And Manager Was The Cause Of My Beef With...