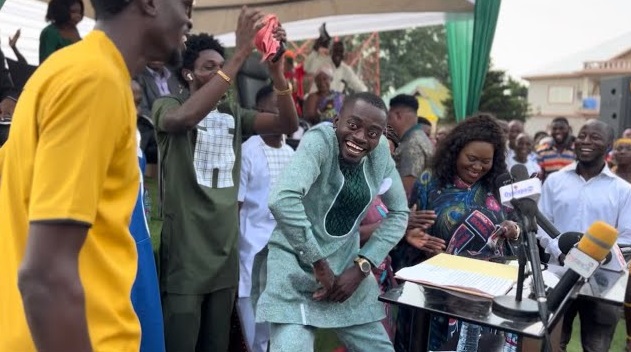 This year’s speech and prize-giving day is themed: ‘The Impact Of Education On The Economy’.

The ceremony was graced by a lot of top personalities in the Kumawood movie industry like Akyere Bruwaa, Berima Bediide, and many others.

One of the most interesting moments at the ceremony was when Lilwin, who is the proprietor of the school decided to read his speech and welcoming address in English.

READ ALSO: Maame Serwaa And Her Lover Allegedly Break Up As They Unfollow Each Other

Even though the actor has publicly stated that he did not get a formal education, he tried his best to read the speech in English Language.

Before he started to read the speech, Lilwin issued a word of caution to the people gathered there to get ready for their ribs to be cracked because his speech was going to be a hilarious one.

Well, just as he promised, he did indeed crack them up with the manner he struggled to read the speech he had written for him.

There were many fun moments during the programs as many of the students took turns exhibiting their talents when it came to poetry recitals, dancing, singing, rapping, and many other things.