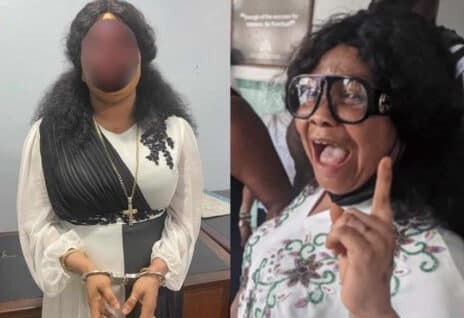 The leader of Heaven Way Church, Evangelist Patricia Asiedua, also known as Nana Agradaa has made her reappearance in court today, Thursday, October 13, 2022.

She was remanded into the custody of the Ghana Police when was arraigned before the court on Monday, October 10, 2022.

READ ALSO: I Get Upset When People With Little Credit On Their Phones And Without Light At Home Insult Me – Sonnie Badu

While she was being accompanied by the police to the courtroom the repented fetish priest was heard seriously singing some gospel songs to suggest that her maker in heaven was going to see her through this battle just like the previous ones.

Nana Agradaa’s current legal case is in connection with an alleged money-doubling scam.

She is facing seven counts of defrauding by false pretense and charlatanic advertisements on TV and in newspapers to lure her victims.

READ ALSO: Yes, ‘Oh Paradise’ Was About A Loved One Who Died – Black Sherif Confirms Song For Deceased Girlfriend

The police on Sunday arrested Nana Agradaa after some members of her church levelled some allegations against her.

That followed viral social media reports showing members of the church, both new and old, who had thronged the church premises to demand their money.