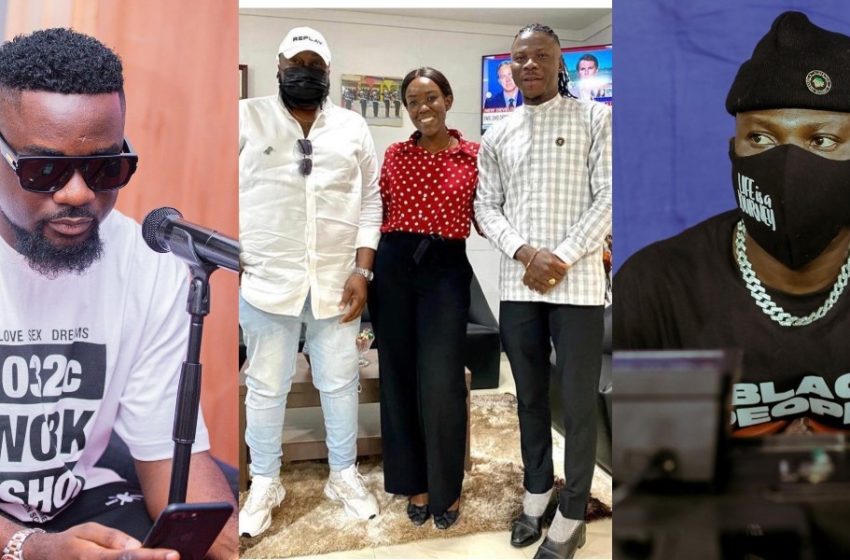 Dancehall star Stonebwoy born Livingstone Etse Satekla and manager of rapper Sarkodie, Angeltown, have reconciled following a bust-up the duo was engaged in.

Photos sighted by Zionfelix.net saw the two personalities who made headlines beaming with smiles for the cameras – an indication that they had sorted out their differences.

One of the reconciliation photos showed Stonebwoy with his wife, Dr. Louisa Satekla posing with Sarkodie’s manager, Angeltown who is affectionately called Angelo.

Another photo showed the two personalities posing with a third person as a sign that peace had been brokered and that all was well.

However, many people have claimed that Stonebwoy wore feminine shoes to the meeting with Angelo.

The shoes Stonebwoy wore appeared like some sort of wedge and had some glitterings on them.

The Putuu hitmaker captioned the photo: “It’s All LOVE On This Side. Earlier Today w/ Angello..No Bad Blood”.

That particular photo showed only Stonebwoy and Angelo smiling at each other in what appeared like an office.

Stonebwoy and Angeltown were reportedly involved in a fracas at the Independence Square in Accra on August 10, 2020.

Reports have it that the outcome of the bust-up landed Angeltown in the eye clinic and also lost Stonebwoy his slot at the Black Love Virtual Concert.

On August 19, Sarkodie, in a press release, addressed issues surrounding the whole fracas and confirmed that indeed, Stonebwoy hit Angeltown.