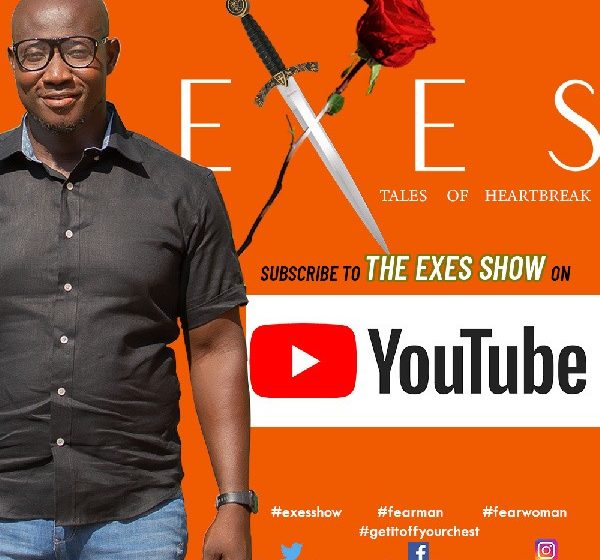 Are you someone’s lai momo or you made someone a lai momo? Then you have a story to share on the Exes, a relationship show written, produced, and hosted by Ato Kwamina Aikins, a very identifiable voice behind many radio and television commercials and jingles.

Aikins asseverates that the platform has been made available for people to share what they went through in their previous relationships and what caused the breakup.

“One thing I always say on the show is that treat the person in your life right now well because that person might be your ex and if one day the person eventually becomes your ex, what do you think that person would say about you?” he says.

“We’re always looking for ideas and content that people can relate to. They say the best jokes are the jokes about yourself. We [team members] all have exes and we also hear people talking about their exes except that there is no platform for them to share their stories. There are some people whose breakups were announced via text messages. That person never had the opportunity to say ‘jack’. Sometimes, you’ll be there and hurting but the moment you get the platform to pour it out there, you’re okay,” Aikins adds.

READ ALSO: I Won’t Allow You To Clothe My Children With Your Skirts – Osebo’s Ex-Wife

The Page 83 Concept team has shot some episodes and Aikins appears to be content with the content so far. He reckons that most relationships suffer as a result of lack of communication and impatience on the part of one party or both. Along the line, some resource persons, he says, would be engaged on the need for effective communication in relationships among others, despite acknowledging that sometimes, a breakup is the best option.

Considering that the show is not focused on tarnishing the hard-earned reputation of people, Aikins points out that guests are barred from mentioning the names of their exes.

“If you’re there and you’re watching and think this person is actually talking about you and this is not how the story was, we’ll give you that platform because we know every story has two sides. But you’ll also not mention that person’s name. Basically, we are not looking for who was right and who was wrong. We’re looking at what went wrong and why they couldn’t resolve it,” he stressed.

Although the primary goal is to serve as a platform for exes to tell their stories, producers of the show, according to Aikins, would facilitate a comeback on condition both parties are willing to reunite.

Efia Odo Showers Praises On Her ‘Mystery’ Bae, Says She Is Proud Of Him