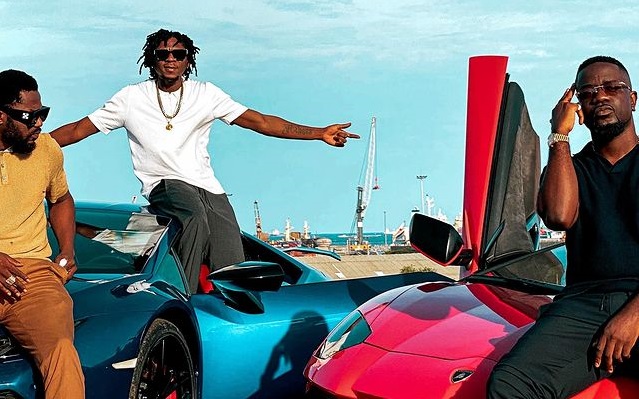 Recently, a video of Sarkodie linking up with his Tema brother Mugeez and Paedae, who are members of the outstanding music group, R2bees in the streets of Tema went viral.

Many netizens started to speculate that the link-up was probably because Sarkodie and R2bees were preparing a new joint for music lovers.

READ ALSO: Only The Wise Will Take Time To Ask Questions When They See Me In Towel – Feli Nuna Bashes Critics

Well, zionfelix.net can report that whatever they were cooking was not a music joint, however, it is a joint concert.

In an exclusive video, Sarkodie shared on his social media pages on Wednesday night, it is revealed that Sarkodie and R2bees are set to storm the United States of America, specifically, the state of New York with a concert.

READ ALSO: VIDEO: Fiancée Of Michael Blackson Reveals Why She Allows Him To Get One Side Chick Each Month

The joint concert from the video shared online is dubbed “It’s About Time” and it is scheduled to take place at the Palladium-Times Square on July 30, 2022.

Ticket details are expected to be announced in the coming days so keep your fingers crossed.

Watch the video shared to announce the concert below

Share
Facebook
Twitter
Pinterest
WhatsApp
Previous articleVIDEO: Fiancée Of Michael Blackson Reveals Why She Allows Him To Get One Side Chick Each Month
Next articleNetizens Heap Praises On Ayisha Modi As She Storms Social Media With Video Showing Off Her ‘New’ Banging Body
- Advertisement -