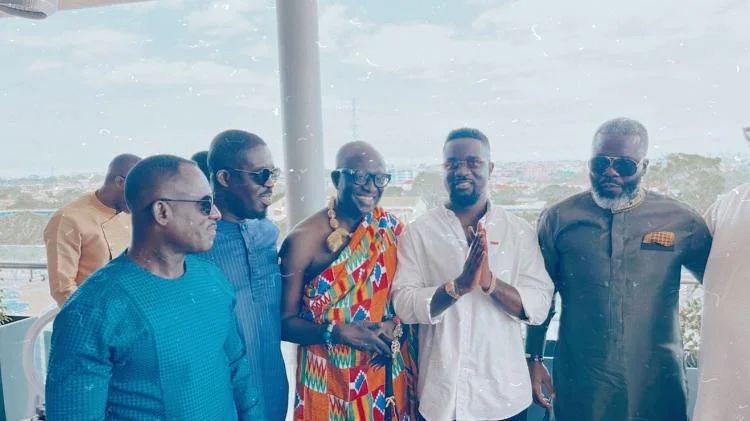 Sarkcess Music boss, Michael Owusu Addo, popularly called Sarkodie is one of the entertainers in the Ghanaian music space noted for rolling with the ‘big men’ in the country.

On countless occasions, Sarkodie has hosted some of the most respected people in Ghana’s entrepreneurial space in his house for the Sarkcess Brunch.

Well, this around it was not a Sarkcess Brunch at his home, however, he was seen hanging out with members of the East Legon Executive Fitness club at the newly opened Alisa Hotel in the industrial hub of Tema.

This facility’s grand opening was held the same day with lots of dignitaries in attendance.

READ ALSO: ‘Leave My House’ – Joyce Dzidzor Mensah Sacks Dr. UN From Her House As He Goes Begging For A Comeback

According to a GNA report, the imposing tower has 52 guestrooms including four contemporary suites to ensure a higher level of comfort for guests. It has an all-day Atlantic restaurant and Sky Bar.

In some videos that have surfaced online from this meeting, the award-winning rapper was seen arriving at the venue in the company of his management team led by Angel Town.

In a different video, the ‘Non Living Thing’ hitmaker was seen exchanging pleasantries with members of the club, which include top personalities like Dr. Ofori Sarpong, Osei Kwame Despite, Samuel Osei Kufuor, KKD, and many more.

Check out the videos below…