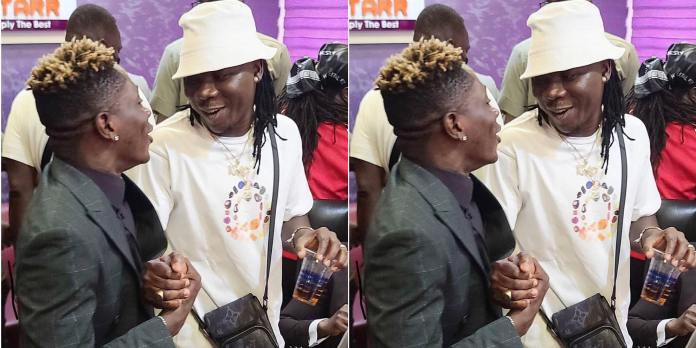 Following their recent back and forth on social media over who is the real ‘1something’ in the Ghana music industry, Shatta Wale and Stonebwoy finally met today, March 1, 2021, in public.

Their meeting took place at the studio of Starr FM when Bola Ray was celebrating his 44 birthday in grand style.

Even though Bola Ray has been off the seat as the host of the drive time show after he went neck-deep into the management of a media outfit, he decided to make a big come today as he celebrated his birthday.

Bola decided to do this just to officially outdoor the new host of Starr Drive, Foster Agor, formerly of Orange FM in Kumasi to the listeners of Starr FM.

Well, his big comeback saw the two top-rated musicians pull through as special guests to surprise him.

While many thought all was not well in their camp because of their recent rants online about who originally began the ‘1something’ challenge, the picture from their meeting was really a nice one.

The two musicians, Shatta Wale and Stonebwoy gave themselves a warm hug and shook hands when they saw each other and engaged in a hearty chat as well.

They also cracked a few jokes a few times before they finally took their seats.

Clearly, their fans must learn from them.

“What Are You Teaching Your Followers?” – Blakk Rasta Chides Shatta...