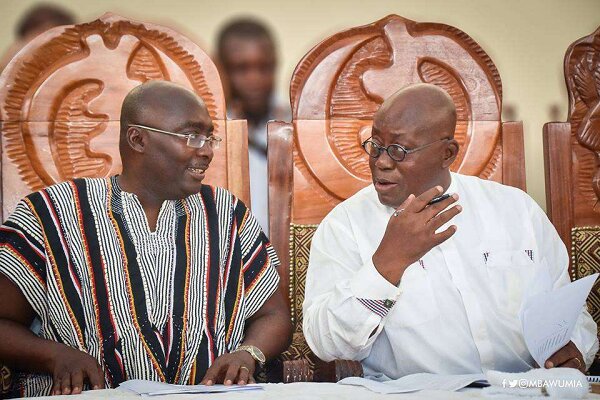 The vice President Of Ghana, Alhaji Bawumia, and his boss, President Akufo-Addo have been captured in a happy mood moments after the Supreme Court justices dismissed John Mahama’s election petition.

The first and second gentlemen of the Republic of Ghana were captured watching the hearing live on TV in the office of President Akufo-Addo at the Jubilee House earlier this morning.

It will be recalled that the justices of the Supreme Court led by the Chief Justice, Anin Yeboah on Thursday, 4 2021 ruled in favor of the 1st respondent (Electoral Commission) and the second respondent President Akufo-Addo as it dismissed NDC’s John Mahama‘s case on five grounds.

In delivering their final judgment, the Chief Justice said that the arguments and evidence brought before it by the petitioner do not have what it takes for the 2020 election results to be annulled and a re-run caused to happen.

“The petitioner did not demonstrate in any way how the errors affected the declaration of the election…We have therefore no reason to order a re-run [of the election].

We accordingly dismiss the petition,” Chief Justice, Kwasi Anin-Yeboah said while reading the ruling of the court