#VGMA23 LIVE UPDATE: Check Out All The Events As They Unfold 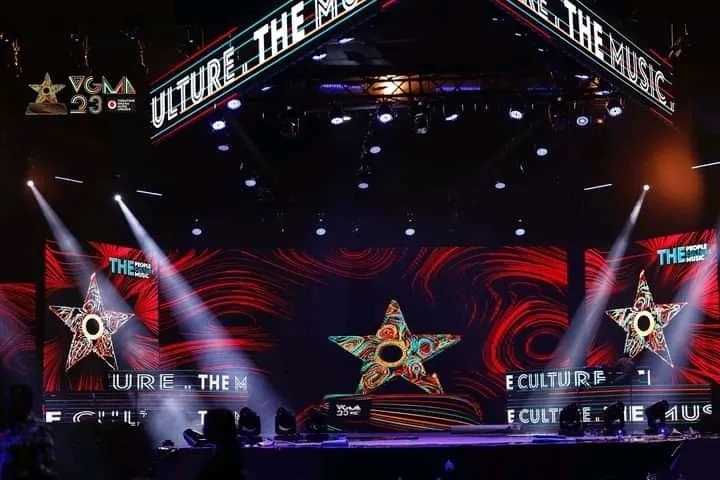 The 2022 edition of the Vodafone Ghana Music Awards is underway.

Kindly stay tuned as we update you on the list of winners and all the interesting things that will happen at the awards event. Please REFRESH this page to see new winners!

The show is underway with an opening performance from the legendary Obrafour.

Cina Soul and Akwaboah mount the stage to perform as a duo — I can bet that they will definitely perform their viral song ‘Obiaa’.

SP Kofi Sarpong comes on stage to present the award for the ‘Best Gospel of the Year’ and the winner is Ohemaa Mercy.

Blogger Zionfelix and Gh Kwaku present the award for the ‘Best Hip-hop’ song of the year and the winner is the sensational new act, Black Sherif.

The award for ‘Best Hip-life Song’ is being presented by award-winning actress Lydia Forson. She announces the winner of the category is Okyeame Kwame who wines it with his smash hit song ‘Yeeko’ which features Kuami Eugene.

After the presentation of the first three awards on the night, Stonebwoy has mounted the stage to thrill fans with his songs.

The ‘International Collaboration of the Year’ is next and it goes to Gyakie for her song ‘Forever Remix’ which features Nigerian music act, Omar Lay.

Popular radio broadcaster, Frankie Five is on stage to present the award for ‘Gospel Artist of the Year’ and the award goes to Joe Mettle.

Musician turned artist manager and sound engineer is on the stage to present the award for the ‘Best Hip-life/Hip-hop Artist of the Year’. And to nobody’s surprise, Sarkodie is announced as the winner.

Joe Mettle is back on the stage to perform with Niiella after winning the award for ‘Gospel Artist of the Year’ a few minutes ago.

It is another gospel act performance. Ohemaa Mercy who happens to be one of the finest gospel musicians has mounted the stage to thrill patrons after the spectacular performance of Joe Mettle and Niiella.

After a quick commercial break, the event is back on and the next category is ‘Best Highlife Artist of the Year’. Adina and Anthony present the award to Akwaboah.

The ‘Best Afropop Song of the Year’ award is next to be presented and the award goes to Fameye for his hit single ‘Praise’.

The UNESCO country rep called Mr. Abdul Rahma mounts the stage to present the award for the ‘Best Reggae/Dancehall Song of the Year’. The winner is announced as KiDi for his smash hit song ‘Touch It’.

There is another musical performance break. Highly Spiritual Music signed act, Mr. Drew takes the stage to entertain the audience and hopefully get them on their feet to dance their hearts out.

The man many have been waiting for, Black Sherif has finally taken the stage to perform. From the cheers at the auditorium, it appears the crowd have been dying to see him on stage.

After that energetic performance from Black Sherif, we are back to giving awards. The category up next is ‘Collaboration of the Year’. The winner of the category is D-Black for his song ‘Enjoyment Minister; which features Stonebwoy and Quamina MP.

The ‘Best Afrobeat/Afropop Artist of the Year’ is the next category in contention. Joy FM’s Kojo Yankson announces the winner as KiDi.

Legendary musician Rocky Dawuni and actress Akosua Busia are on stage to present the next award which is the ‘Best Reggae/Dancehall Artist of the Year’. The winner is announced as Stonebwoy — this is his second award at the 2022 VGMAs after his ban in 2020.

It is PARTY time at #VGMA23. Celebrated Ghanaian DJ, DJ Black has mounted the stage to blast all the songs that will get the crowd on their feet, and indeed they are jamming to his selection.

The ‘Down Flat’ hitmaker, Kelvyn Boy has taken over the stage and just as expected the audience are still on their stage partying hard.

It is performances back to back now. S3fa is also on stage and dishing out all her hit songs to the admiration of the crowd in a lovely red dress.

Well, the boss of Black Avenue Music. D-Black is up next after the splendid performance of his signed act, S3fa.

We are back to giving awards and the next category which is for the ‘Best Rap Performance’ and it is a tough one. The award goes to Lyrical Joe – Surprised?

Media personality George Quaye and musician, KK Fosu are on stage to present the award for the ‘Best Highlife Song’. They announce the winner of the category as Kofi Kinaata for his song ‘Thy Grace’.

The ‘Best Afrobeats Song’ is next and it is being presented by the South African High Commissioner to Ghana and the winner is announced as S3fa for her song ‘E Choke’ which features Mr. Drew.

It is the turn of the Golden Boy to thrill the audience at the Grand Arena and like always he has swept literally the whole auditorium to its feet as patrons dance to his songs.

The award for the ‘Record of the Year’ and ‘Audio Engineer of the Year’ of the year is next after that mind-blowing musical performances and it goes to Amaarae for her song ‘Sad Girlz Luv Money’ and the latter goes to Christian Van Rootselaar & Jaap Wiewel.

Before the final batch of winners of the night are announced, the Flip The Music sign music star, Gyakie mounts the stage to entertain the patrons who look tired now, LOL.

Just when it seemed that the audience was tired, King Promise has mounted the stage to get them on their feet dancing to his songs.

The ‘Best New Artist of the Year’ is the next category and it goes to none other than the newest sensational singer and songwriter, Black Sherif.

‘The Album of the Year’ award also goes to KiDi for his ‘Golden Boy’ album.

Camidoh has finally taken the stage to perform after a lot of anticipation from the crowd at the auditorium.

Mayorkun has taken over the stage and is doing what he does best, which is to entertain.

‘The Vodafone Green Award’ is specifically to appreciate artists using their songs to campaign for a safer environment. This year’s award goes to Stonebwoy.

The award for ‘Vodafone Most Popular Song of the Year’ is next and it goes to KiDi with ‘Touch It’.

Thanks for staying with us. Join us same time next year for another existing update on the VGMA night.