VIDEO: Black Sherif And Asake Get Fans In Frenzy As They Storm The Streets Of Nima 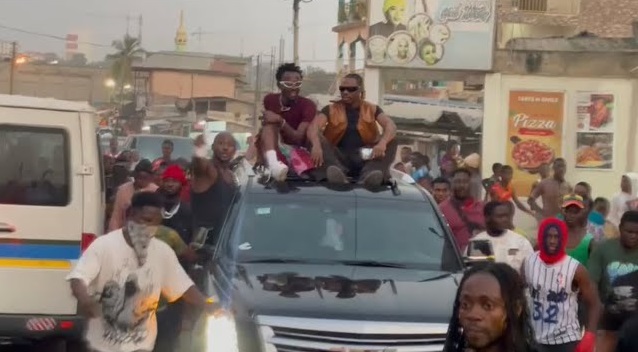 The streets of Nima in Accra could not have enough of sensational Ghanaian musician, Black Sherif and his Nigerian colleague, Asake, when they decided to hit the streets on December 1, 2023.

The two musicians sitting on top of a Land Cruiser got many of their fans chanting their names and singing their praises as they made their way through the principal streets.

The security team they had with them had to work extra hard and tirelessly to ensure that the cars in the convoy of these top music acts had the liberty to move without any difficulty.

Blacko and Asake ended their street tour by taking pictures with some opinion leaders in the Nima community and their top fans.

READ ALSO: ‘Why Should I Respond To You When You Cannot Fill A School Park’ – Kevin Taylor Te@rs Into Sarkodie For D!ssing Him

Asake has been in Ghana since the 2022 Christmas festivities for two major music concerts, Afrochella and Afro Nation.

It is also expected that Black Sherif will join the ‘Mr. Money’ crooner, Ololade Ahmed better known as Asake at the debut edition of the Beer With Us Festival (BWUFEST) billed to hold Friday, January 6, 2023, at the Landmark Leisure Beach, Oniru, Lagos.