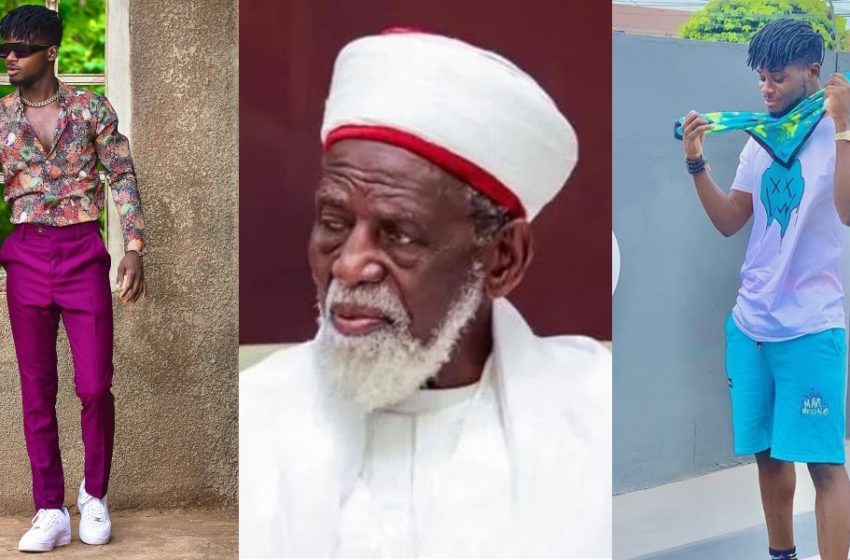 Recently crowned Artiste of the Year at the just-ended Vodafone Ghana Music Awards, Kuami Eugene, has given reverence to the Chief Imam by presenting the award to him.

The Angela hitmaker, in a video sighted by Zionfelix.net, was seen at the residence of the Chief Imam Osmanu Nuhu Sharubutu to inform him of his recent success.

After announcing his mission, and showing off his award, Kuami Eugene was prayed for the the revered Islamic cleric.

Kuami Eugene who resides in Fadama, a suburb of Accra, where the Chief Imam also resides, paid a courtesy call on the top cleric as is custom of anyone in the neighbouhood who tastes victory.

Kuami Eugene was seen wearing a white shirt and was on his knees as the Chief Imam Osmanu Nuhu Sharubutu prayed for him.

After the prayer and blessings, Kuami Eugene sat on a seat close to the chief Imam’s and was seen having a conversation with him.

The revered Islamic leader was seen beaming with smiles indicating that he was very happy that one of his sons had done the whole neighboorhood proud.

Kuami Eugene was adjudged the Artiste of the Year at this year’s edition of the VGMA’s which happened to be the 21st time the event was being held.

The Open Gate singer beat the likes of Diana Hamilton, Sarkodie, Medikal and Kofi Kinaata to win the ultimate award.