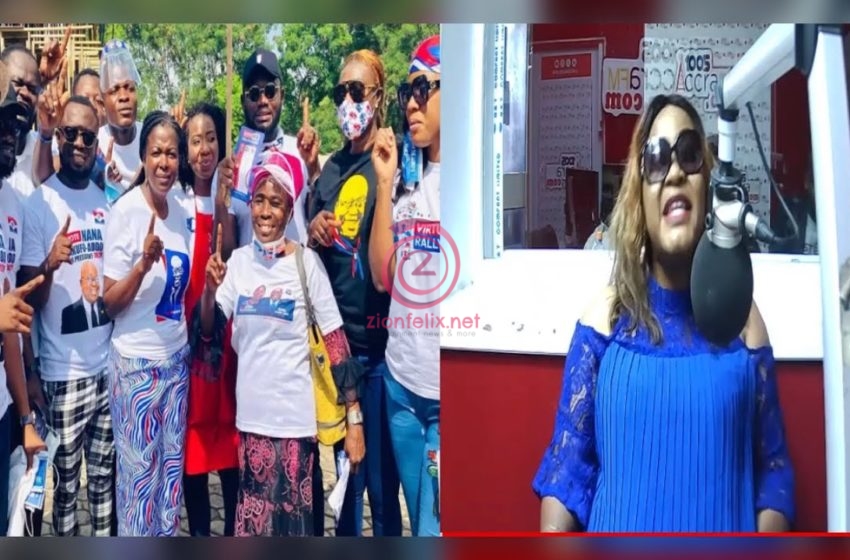 Kumawood actress, Christina Awuni has reacted to a section of Ghanaian actors who campaigned against John Dumelo at the Ayawaso West Wuogon Constituency.

Barely 24 hours ago, Prince David Osei, Kalybos, Bismark The Joke, Bibi Bright and others teamed up to campaign for NPP’s Lydia Seyram Alhassan.

After their actions were criticized, Christiana Awuni has added her voice to the criticism.

During an interview with Nana Romeo on Accra FM which was monitored by Zionfelix.net, Madam Awuni stated that her colleagues didn’t do well for taking such a decision.

She said their decision to campaign against John Dumelo proves that there is no love among them.

Christiana Awuni further stated that they should have campaigned in a different constituency instead of doing this to tease John Dumelo.

READ ALSO: Hypocrites! You Didn’t Support John Dumelo’s Campaign Until We Campaigned For NPP – Kalybos Hits Back At Critics

She added that if they took money from the New Patriotic Party, they will surely finish spending it.

Christiana Awuni stressed that she is disappointed in all those who involved themselves in this after actors were ridiculed by Shirley Ayorkor Botchwey.