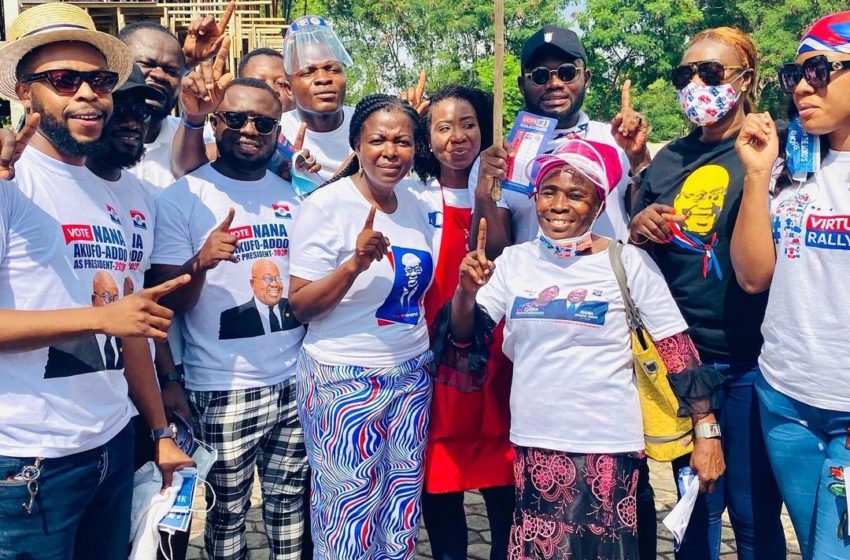 Some prominent Ghanaian actors and actresses have been seen busily campaigning for Ayawaso West Wuogon MP, Lydia Alhassan ahead of the December 7 election.

In photos sighted by Zionfelix.net on Instagram, the actors and actresses were seen clad in NPP T-shirts as they ramed the streets of Ayawaso West to preach to Ghanaians to vote for Akufo-Addo and Maa Lydia.

They were seen sharing political tracts and fliers of the NPP as they campaigned for the ruling government.

Following their massive campaign, the entertainment industry players posed with the sitting MP for Ayawaso West Wuogon as they all beamed with smiles.

Photos from the last gap campaign from the actors were posted on the official Instagram page of actor Prince David Osei.

After posting the photos, he captioned them: “This election is about the future of the youth of Ghana. The question we should ask ourselves as young people is: whose polices and programmes guarantee us a future? The clear answer is Nana Akufo-Addo and the NPP. Policies such as free SHS, NABCO, NEIP, 1D1F, Planting for Food and Jobs and many other youth-centred policies have guaranteed our future. On December 7, we must vote for continuity. We must vote number 1 for Nana Akufo-Addo and the NPP to do more for us. #VoteNumber1 #VoteNanaForProgress #4MoreForNana @jeneral_ntatia @kalybos1 @bismarkthejoke @bibibright @jessicawilliamsgh @cwesiotengofficial @sammiawuku @clickmanteaw @iamqwinadepa #thebattleisthelords“

Many celebs in Ghana have openly declared support for particular presidential and parliamentary candidates and have been seen canvassing for votes for them.