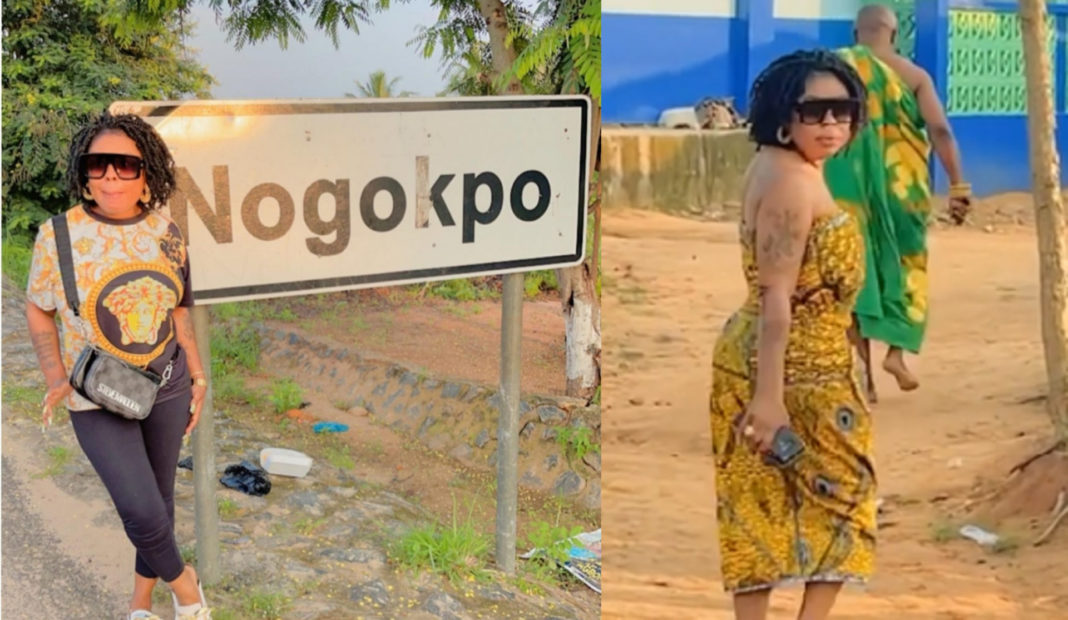 Afia Schwarzenegger released photos of herself at Nogokpo, the town which is very popular for its powerful deities on Monday afternoon.

Soon after the videos surfaced online, many netizens began to speculate and question whether she was in the town to visit the shrine amid the brouhaha between herself and the Ashanti Regional Chairman of the NPP, Chairman Wontumi.

Others also said that she was just showing off just to save face following the decision of Chairman Wontumi to sue her in court and demand an amount of Ghc2Million cedis for defaming him.

As these discussions continue on social media, the popular comedienne has released a video of the moment she was going to the shrine to prove that she is playing.

In the video Afia Schwarzenegger shared online, she is seen with a yellow and black colored cloth wrapped around her breast area downwards.

READ ALSO: I Bought Mosquito Repellent With My Own Money And Sprayed The Entire National Theatre Auditorium Before My Guests Could Enter To Watch My Play – Fiifi Coleman

She also added a caption that suggests that she went there to leave Lawyer Maurice Ampaw in the hands of the gods because he alleged in a viral video that she slept with dogs some time ago.

The full caption of the video reads: ‘For the fools who didn’t get the memo I don’t play neither do I brag… This foolishness must end.. your opinion is my toilet so flush it!!!! Good evening.. still practicing proverbs 30:10 I’m a typical Ashanti woman… Except you have evidence of me sleeping with a dog… Togbe Nogoko is settling this once and for all… DONT TRY ME!!!!!!’