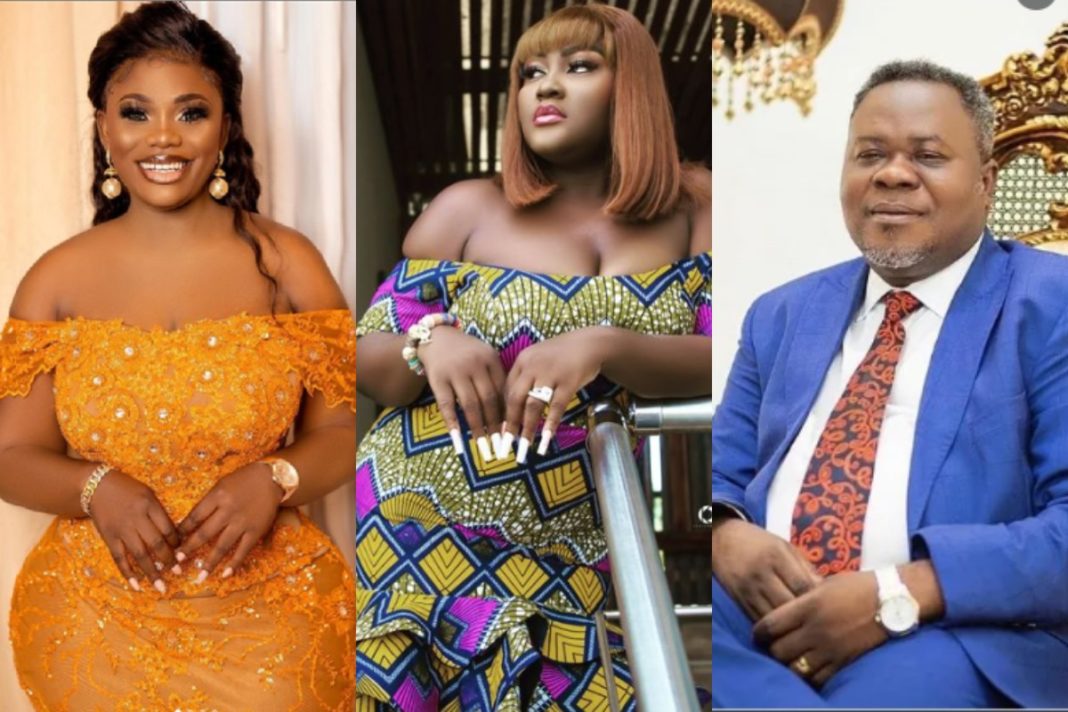 The CEO of Jay And Jay Group, Sally Akua Amoakowaa Mensah aka Akua GMB has through her lawyers served a cease and desist notice to media personality, Mrs. Matilda Adjoa Adu-Boateng who is popularly called AJ Poundz.

What the notice is simply seeking is that AJ Poundz must apologize to Akua GMB in the next seven days for the allegations she made against the latter’s person when she was recently interviewed by Delay on the popular Delay show.

READ ALSO: I Slept With My Ex-boyfriend A Week After His Wedding – Blessing Afriyie Of Date Rush Fame Makes Shocking Confession

AJ Poundz in that interview which aired on TV3 on Sunday, July 10, 2022, accused Akua GMB of infidelity at the time she got married to rich Ghanaian businessman, Dr. Kwaku Oteng.

Speaking about what caused the split between Akua and Dr. Oteng, AJ Poundz revealed that Akua had always wanted to exit the marriage.

“Her husband confronted her over infidelity suspicions and she confessed to being in a relationship with someone for a year. I wasn’t surprised about the divorce; it’s something she really wanted to do. She was married but was single. That’s why I said I never caused her divorce. Nobody can mess your marriage up; you mess it up yourself,” AJ Poundz said.

READ ALSO: My 9-Year-Old Son Pushed Me To Search For Love On Date Rush – Shalsha Reveals

Well, this utterance and the others she made in the interview are what the lawyers of Akua GMB describe as outright falsehood which was deliberately calculated to tarnish the good name, brand, and hard-earned reputation of the 2011 Ghana Most Beautiful winner.

They added that these allegations AJ Poundz leveled against Akua also caused her emotional and psychological pain for which reason they are asking that she never speaks about her again on any platform.

READ ALSO: ‘You Are Senseless And Poor So You Cannot Advise Me’ – Shatta Wale Fires Arnold Asamoah-Baidoo

Also, AJ Poundz has been given seven days to make sure all the platforms which republished the things she said to delete them completely or face them in court.

Read the full notice served on AJ Poundz below

Actress Gloria Sarfo Jumps To The Defence Of Her Friend, Akua...