Ayisha Modi Joins The Samini – Stonebwoy Social Media Banter; Threatens To Expose Samini If He Does Not Ceasefire 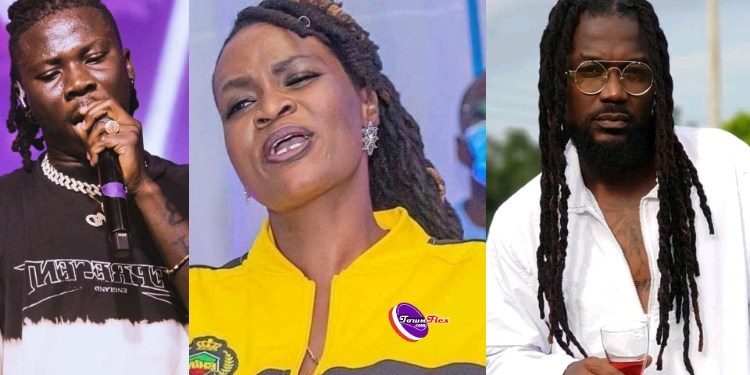 Stonebwoy’s ‘godmother’, Ayisha Modi aka She Loves Stonebwoy has joined the ongoing social media banter between the Burniton Music boss and the HighGrade Family president, Samini.

Her decision to join the all-men affair follows a supposed threat by Samini to come live and expose Stonebwoy.

Sharing a picture of herself in the studios of Angel FM Accra with a long caption after the back and forth which happened on Twitter was over, Ayisha Modi said that it was nonsense for Samini to suggest that he was coming live to expose Stonebwoy.

She warned that if Samini dared to come live on any of his social media pages, she would do the same just to reply to him by dropping some bomb on him.

READ ALSO: Nigeria Has Been Putting Africa On The Map, Let’s Commend Them – Stonebwoy (+ Screenshot)

Ayisha Modi added that once she was done, she was going to love social media for the rest of her life because her life will boom and she will be very fulfilled.

Her full caption seen by zionfelix.net to the picture reads: “Who is coming live to expose who? Am here waiting. What nonsense kraaa is this,? 😂😂😂😂😂 Arrrr Ghana go sweet ruff😂😂😂😂😂. Remember if I also come live it will be on becoming be becoming 😂😂😂😂😂😂😂😂😂😂😂😂. I will come live and later live social Media for the rest of my life cos my live will Boom 💥 the whole Ghana . @samini_dagaati biko come let’s do this fast so I can go back to sleep 😴. Baba and solo come here cos u both have some questions to Answer. Stupidity at it best. @sonniballi is calling u. I will bring back full history. Nana king and Nana queen will be popular again.”

‘We Have To Be Realistic With Our Expenditures And Ambitions’ –...