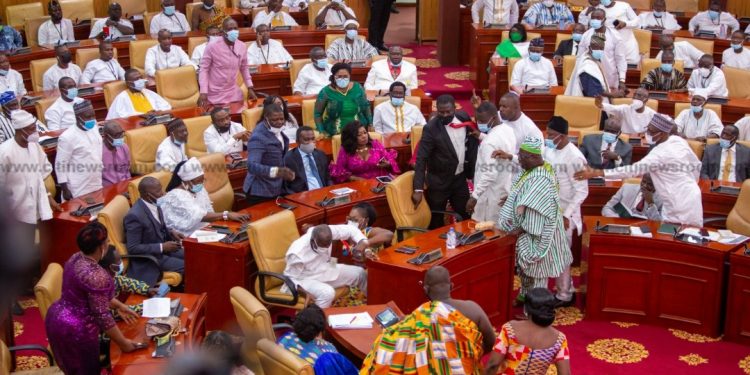 Some Members of Parliament (MPs) from the NDC and NPP side of the house have been seen in live video engaging in a near fight on the floor today as the 7th parliament prepares to dissolve this today.

This clash is a result of the NDC firm decision to occupy the majority side (the right wing) of the parliament.

Ahead of the parliamentary proceeding, the NDC MPs-elect stormed the parliament house in the white attires early to take the majority side of the house

From the videos, the NDC MPs sent a clear message to the NPP MPs that they are the new majority in parliament and deserve to be seated where they are.

But this development does not sit well with some of these NPP MPs who decided to confront the NDC MPs and asked them to move to the left side of the house.

So far, NPP MPs like Ursula Owusu Ekuful and K.T. Hammond have been leading the child on the NPP front, insisting that they will take their seats at the majority side even though the NDC MPs are there.

Watch the videos from the house below…