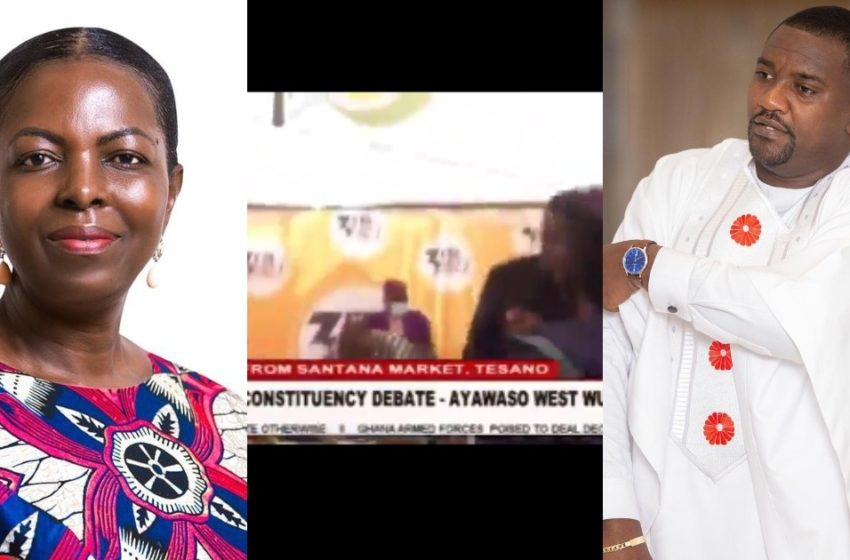 The incumbent Member of Parliament for Ayawaso West Wuogon, Madam Lydia Alhassan who represents the ruling NPP and NDC parliamentary candidate John Dumelo have engaged in a fracas on live TV.

The duo was taking part in a live debate being held in the constituency in the run up to the December 7 general election.

While the debate was going on, Lydia Alhassan indicated that John Dumelo should have acted wisely before sending excavators into the constituency to dredge gutters.

According to the incumbent MP known popularly as Maa Lydia, John Dumelo should have sought for permission from authorities before acting.

This comment did not go down well with the actor-turned -politician and he tried calling the sitting MP to order over the comments he felt were rather insulting to his person.

As a result, John Dumelo resolved to discontinue the debate and walk out but he was advised not to leave and then proceeded to take his seat again.

He then accosted Maa Lydia and said that he was not going to sit down to be insulted and asked her to retract her comment.

John Dumelo and Lydia Alhassan will face off in the upcoming December 7 general election for the opportunity to represent Ayawaso West Wuogon in the next parliament.