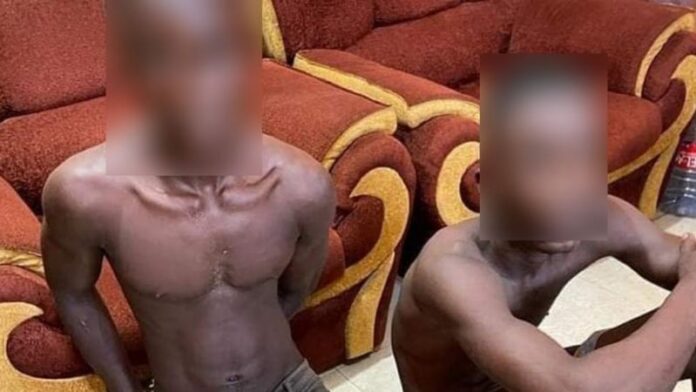 Zionfelix.net has picked a report which says that the fetish priestess alleged to have asked the two teens from Kasoa to gruesomely murder someone and add Ghc5000 for a lot of money has been arrested by the Central Region Police.

According to police sources, the fetish priestess was arrested at Amanase near Suhum in the Eastern Region.

The two suspects Felix Nyarko, 15, and Nicholas Kiki, 17, told the police after their arrest that the spiritualist demanded a human being as well as ¢5000 in exchange for riches.

In their bid to meet her demand, the duo admitted to the police that they killed Ishmael Mensah Abdallah, a family friend of the first accused, Felix.

They lured him from his home to a nearby uncompleted building where the second accused, Kini, hit the back of his neck with the wooden handle of pickaxe and Felix hitting him with a cement block.

READ ALSO: Touching Story Of How A Beautiful Young Lady, Abigail’s Life Was Saved At A Shrine Because She Was A Virgin Told

The duo had also planned to demand ransom from the deceased’s parents in addition to meet the spiritualist’s demands in order for the ritual to be conducted.

Days after investigators set off on a manhunt for the spiritualist, she has been nabbed and is expected to assist the police with investigations into Ishmael’s murder.

Meanwhile, the suspects have been charged with murder and conspiracy to commit murder. The two are scheduled to reappear before the court on April 20, 2021.

Share
Facebook
Twitter
Pinterest
WhatsApp
Previous articleTouching Story Of How A Beautiful Young Lady, Abigail’s Life Was Saved At A Shrine Because She Was A Virgin Told
Next articleNana Aba Offers To Help Security Man Who Has A Passion And Talent In Radio Presenting (Video)
- Advertisement -

Sad Video Of The Moment The Body Of The 10-Year-Old Kasoa...