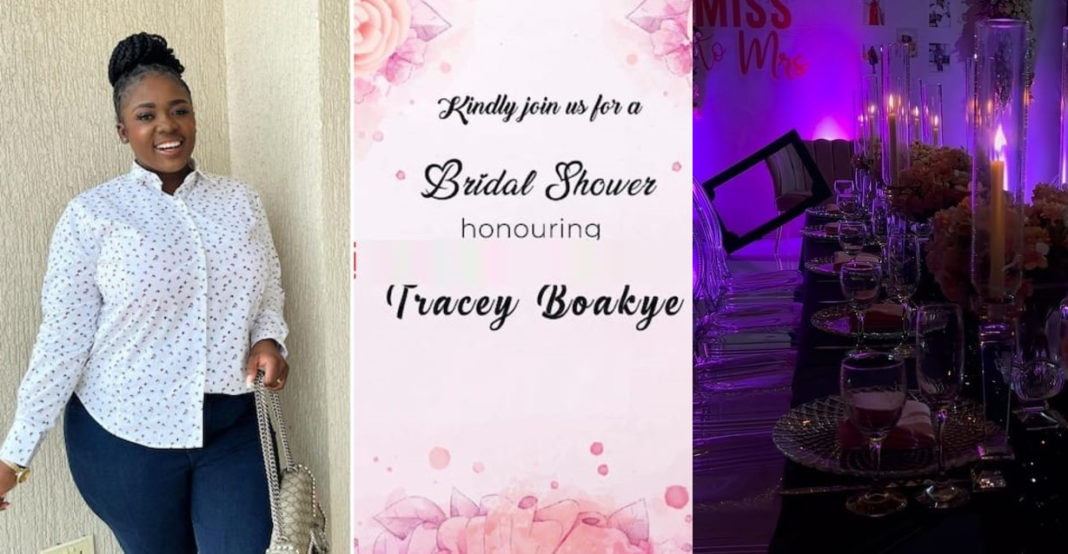 The reports about the upcoming wedding of the mother of two started online as a rumor some days ago until she confirmed it herself on Saturday, July 23, 2022, by sharing an invitation to her bridal shower on social media.

READ ALSO: Alleged Identity Of The ‘Mystery Papa No’ Tracey Boakye Is About To Marry Finally Revealed? – Watch Video

In the video, it is observed that the venue of the bridal shower was quite dark and there were a lot of candles arranged on the tables nicel.

Also, Tracey Boakye’s framed photos are seen on the walls of the venue she selected to host her bridal shower which happened in the Garden City.

In another video, some friends of Tracey who were invited to the bridal shower are seen enjoying themselves.

It should be noted that as it stands now, the groom-to-be still remains a mystery. However, Tracey Boakye has announced her wedding has the hashtag #Francey22.

Mc PapJay of Y102.5FM, Kumasi, has been billed to be the Master of Ceremonies with DJ Lamar as the official disc jockey.

The event, according to Tracey Boakye‘s post, will be produced by filmmaker Kofi Asamoah.

See the full details below…

Share
Facebook
Twitter
Pinterest
WhatsApp
Previous articleAlleged Identity Of The ‘Mystery Papa No’ Tracey Boakye Is About To Marry Finally Revealed? – Watch Video
Next articleBlack Sherif’s Lawyer Reveals His Reaction After The Court Dismissed His Ex-manager’s Injunction Against Him
- Advertisement -

Photos: Fans Mob Afia Schwarzenegger At ‘The Devil Between My Legs’...