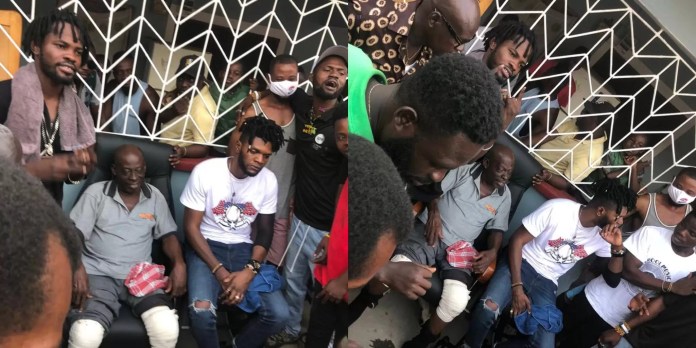 After all the back and forth on social media, the boss of OGB Music, Ogidi Brown and his former signee, Fameye finally met today, Wednesday, December 30, 2020, in Antoa.

Their meeting follows Ogidi Brown‘s summons he served on Fameye over the alleged $50K he owes him.

READ ALSO: Blakk Cedi Shares Unseen Photo He Has With Stonebwoy’s Daughter, Jidula And Sends Special Birthday Message To Her As She Turns Three

While many people on social media felt that Ogidi Brown was just blowing hot air in order to get public sympathy, the latest photos we have seen online show he meant every word he said in his viral video.

According to a report zionfelix.net has come across on CelebritiesBuzz.com.gh, a close source who was at the much-anticipated meeting between Fameye and Ogidi Brown before the elders of Antoa today said that Fameye admitted that he owes Ogidi Brown the said money.

In their report, they also added that Fameye promised to pay half of the amount in January 2021 after which he’ll pay the rest by March — which settles the matter for now.

The great news from the meeting is that it was a peaceful one that saw both parties walk away in a happy mood.

Check out the photos CelebritiesBuzz.com.gh attached to their story below…

Share
Facebook
Twitter
Pinterest
WhatsApp
Previous articleBeautiful Wedding Invitation Of Patapaa And His Obroni Girlfriend Pops Up (See Photo and Details)
Next articleSome Relationships Will Help You To Discover New Restaurants, Not All Of Them Will Lead To Marriage – Juliet Ibrahim
- Advertisement -