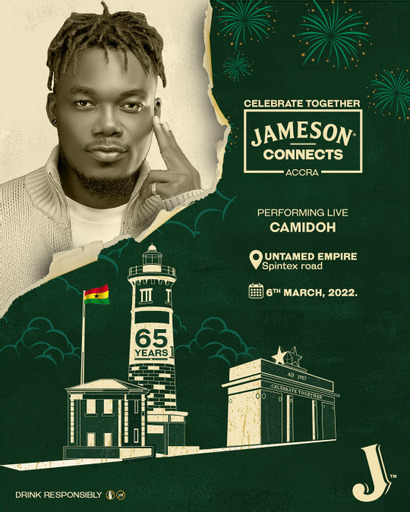 Ghana is 65 years old. Although you are probably not as old, there is absolutely no reason why you can’t mark the day with jubilation. And what better way to do this than to link up with all your favourites in the capital at Jameson Connects Accra.

Jameson Ghana wants you to join in the celebration on Sunday, March 6, 2022, at Untamed Empire, Spintex. The event will reflect Ghana’s culture, complemented by the Jameson spirit, which is characterised by goodwill, unity, diversity, taste and style.

Ghana’s culture involves her lovely music from the rich talents across the land. A true celebration has music as a component and the March 6 event will not be any different.

From ‘sugarcane sweeter but girl your love is sweeter’ to ‘anopatutuutu’, here are all your favourite artists performing at Jameson Connects Accra.

From Ghana to London and then the Netherlands, Smallgod is a fusion of different aspects of the music industry. His versatility and exposure make him one of the biggest plugs in African music as an artist manager, Audimack ambassador and musician.

Camidoh is a Ghanaian singer, songwriter, rapper and record producer. The 28-year-old whose full name is Raphael Camidor Kofi Attachie does Ghanaian Afropop and R&B.

He has a host of songs including Maria, Available, For My Lover among others. This Ghanaian talent has collaborated with other musicians on the land including Efya, Kelvyn Boy, Teephlow, Sena, D-Black, Darkovibes and the Ameno Amapiano Remix hitmaker Nektunez.

Camidoh’s recent hit, Sugarcane, featuring Phantom is one of the most played songs in 2022 and is leading trends on TikTok.

Renie Asi Bampoe Abu known in showbiz as Asi Renie is a Ghanaian singer and songwriter who was born in the United States of America. Her genre of music is a mix of Neo-Soul, R&B, Afro-Blues and Afro-Soul.

Asi’s EP ‘Pieces of Me’ ushered her into her music career and has since released singles like ‘Hold On’, ‘Love Ridding’ featuring $pacely before a second EP ‘Chapter V’. Her graceful voice shows a Ghanaian talent ready to take on the world of music.

If you’ve ever heard “5:30 in the morning and you know I can’t wait until I see you”, Bryan The Mensah is your guy. The Ghanaian musician’s song, ‘Until I See You’ featuring Titi Mensah on his ‘Road To Hastafari’ is everything his music entails – pure quality and talent that will compete anywhere in the world.

Bryan Kweku Mensah is a Ghanaian rapper who is not afraid to hit some singing notes where necessary. He released his debut EP in 2017 titled ‘Friends with the Sun’ where he got one of his greatest career accolades being named as Apple Music’s New Favourite Artiste for October 2017.

Bryan has since released ‘WILDLIFE’ in 2018, ‘Not Going Outside’ in 2020 before his latest, ‘Road To Hastafari’. Looking at the sheer talent in the very detail of these releases, Bryan The Mensah is just getting started in the Ghana music industry with the world as an opportunity too.

Ria Boss is one of the real bosses when it comes to vocals. Born as Maria Emmanuelle Grace Bossman-Damiba, Ria has roots in Ghana and Burkina Faso but was born in London and raised in the formerly known Gold Coast.

She is a singer, composer and music producer. Her works include EPs ‘Lonecat’, ‘Bloodbath’, ‘Sweetbaby’, ‘Sampleplate’, ‘Underwater’, ‘Bornday’ and singles ‘Call Up’ and ‘Never Love Again’.

Ogranya is an Afro-soul singer who made an entrance into the music industry with his debut EP ‘Eden Evermore’ which was released in August 2019.

His love for music saw him quit his day job as an architect to make music his primary vocation. Songs by Ogranya include ‘Wicked Somebody’, ‘Imperfect’, ‘Sweet As Temptation’ and ‘You Should Be with Me’.

Marince has works that honour his late grandmother Margaret TsoTsoo Quarco, honours his ancestors and libation among others. His projects include ‘Mafia’, ‘Oblitey’, ‘Non3’ which features Wanlov the Kubolor and ‘Mataheko’. Watch out for this Ghanaian artiste creating his music while honouring tradition.

Essilfie is one of Ghana’s most promising female act and Afro-soul songstress, She dishes out modern Highlife groove based on real life experiences. Some of her projects include ‘Krokro Me’, ‘Lost’, ‘Beautiful Love’ and ‘Letter to You’

Her journey as an artist began when she started posting and performing covers of songs while in her second year at the University of Ghana.

She cites singers such as Sade, Sabrina Claudio, Asa, and Snoh Alegra as her influences.

Looking at the diversity in the list of performers, Jameson is indeed connecting the whole of Accra in an unrivalled way.

Here are simple steps to make sure you do not miss this event happening on Sunday, March 6 2022, at Untamed Empire, on the Spintex Road.

Get your tickets in two ways and join in the celebration.

Purchase the Jameson bottle pack at Melcom and Shoprite stores at the Accra Mall, Achimota Mall, West Hills Mall and the Kumasi Mall are the participating stores for the event.