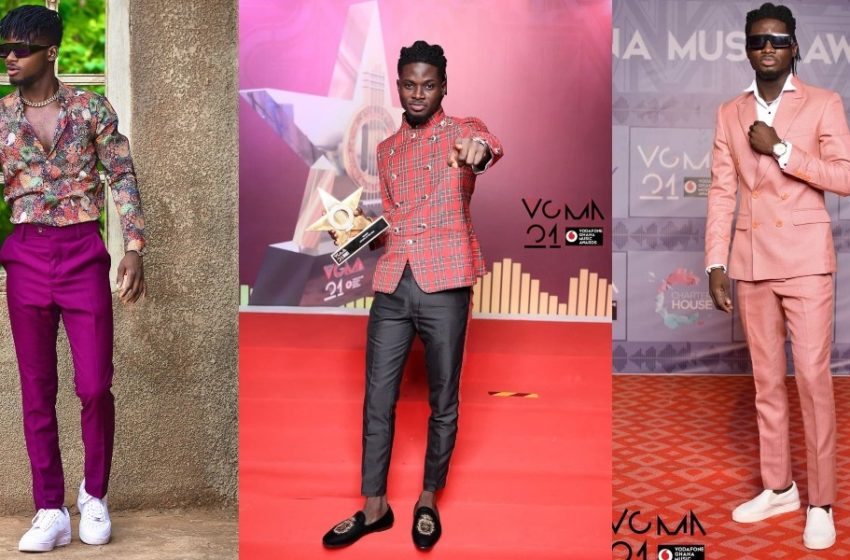 Mrs Juliana Anina Marfo, the mother of Ghana’s reigning Artiste Of The Year, Kuami Eugene, has surprised her son in a radio programme as she was called by host of the show.

In a video sighted by Zionfelix.net, Kuami Eugene who is currently on a media tour, made a stop at Okay FM and had a chat with experienced broadcaster, Abeiku Santana.

As the conversation was ongoing, Abeiku Santana, host of the popular Ekwanso Dwoodwoo, phoned the Angela singer’s mother to the surprise of the singer.

Kuami Eugene who was stunned by the move, indicated that his mother had never spoken on a radio show before.

He appeared to have been really hit by the surprise as he was unable to speak and just looked on wide-mouthed.

Abeiku Santana then went on to question the singer’s mum and asked him what her expectations were prior to her son making history.

According to the Open Gate singer’s mum, she called her son on the day of the awards and told him that God was going to grant his heart desires.

She went on to indicate that it was the grace of God that had brought her son this far and was thankful to all who supported him to chalk this enviable feat.

Mrs Marfo went on to thank Kuami Eugene’s handlers, Lynx Entertainment for helping her son hone his singing talent to make him reach such a height.

When asked how old her son was, Mrs Marfo indicated that her son was 23 years old.

Following the answer, Abeiku Santana indicated that Kuami Eugene passed as the youngest winner of the coveted Artiste of The Year.

Kuami Eugene beat the likes of Sarkodie, Medikal, Diana Hamilton and Kofi Kinaata to win the ultimate award at the just-ended 2020 VGMA.