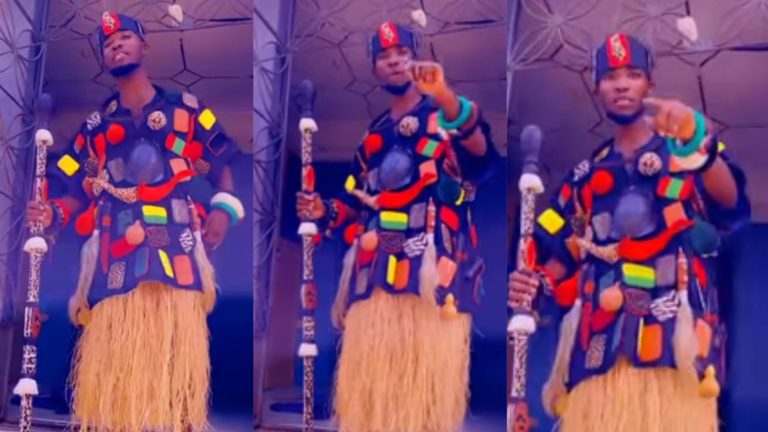 Quite recently, it became public knowledge that Ghanaian teacher, vlogger, and social media education advocate, Michael Owusu Afriyie popularly called Teacher Kwadwo has been summoned to appear before a panel set up by the GES over issues of unprofessional conduct.

This action of the GES followed Teacher Kwadwo‘s one-man campaign to push for changes in the Ghana Education Service (GES).

READ ALSO: ‘Didn’t She Recently Bragged About Being A Millionaire?’ – Netizen Drags Yvonne Nelson As She Begs For $20,000 For Beverly Afaglo [+screenshots]

Well, Teacher Kwadwo appeared before the committee as was expected and after the meeting, he has taken to his Facebook wall to share a long statement providing a blow-by-blow account of what transpired and how the chairman of the committee tried to use the authority he wields to cower him.

‘’WHAT HAPPENED AFTER I APPEARED BEFORE THE “DISCIPLINARY COMMITTEE”

So I arrived at the HALL(where the meeting was gonna take place) and knocked on their office around 10:50am for which the meeeting was at 11am.

Upon entering,their first glance at me was a bit funny(They looked somehow a bit scared)

I replied “I have been summoned here”.

It was then that they realized who I was. They told me to wait outside a little and they will call me back.(maybe erasing the 1st scariest glance from their eyes)

They came to call me back and the meeting started somewhere around 11:20am. Remember I was summoned by a “DISCIPLINARY” committee for which in the 1st place can’t even be on time.Indeed they a very “DISCIPLINED”

Now,when I entered and was offered a seat,the 1st question from an Unknown Man claiming to be the “CHAIRMAN” of the committee was..”But why are u in this attire?

Before I could say “jack!!” He quickly came up with another line saying “oh I’m not asking in a bad way but we know u are a teacher”.

I then asked him..WHY THAT QUESTION? AM I IN CLASS? AND WHAT PREVENTS A TEACHER FROM WEARING THIS,BESIDES I’M ON VACATION?

Upon realizing he has shifted,he quickly came back with OK,YOU LET’S MOVE TO THE REASON WHY WE CALLED YOU”

mind you,the 3 MAIN PEOPLE(director,HR,Siso) who initiated this whole plot were not present at the meeting. I mean none of them!!!!

The SISO,I actually met him inside the 1st time I entered but when they came to call me back I never saw him inside or anywhere near the HALL.

I was schocked. I saw only “NEW FACES” with the exception of 1 man and the GNAT Rep.

Before he began talking,I put my 2 phones on the table,upon seeing the phone He(chairman) thought I was gonna record him so he quickly said “errrrmmm..pls everyone should off his/her phone in the room” He said that by raising his phone and putting it off for everyone to see and said “Leadership by example”.

I smiled and put off my phone since I didn’t want that to distract the whole meeting. He started by saying..

“ we CAN settle this issue with u like father and son or if u do,we will deal with u like it is!!!”

He mentioned the “FATHER & SON” scenario like 3x,thinking I was gonna select that but I said NO!!! LETS US THE WAY IT SHOULD GO! (I said NO because so they knew we could settle this as Father & Son and they used their tactics to intimidate me and upon seeing that,things will backfire,they are now finding ways to bury the issue?

*Why were they “THREATENING” to block my salary?

*why did they say I should pay for the number of days I have absented myself from school to them?

Upon hearing that,He then started to “shout” by raining all kings of accusations about me claiming to be having proof about.

I smiled all through since I saw every line of lie been read.

Let’s not forget that in the letter it was written that I have been summoned due to an “ALLEGED” PROFESSIONAL MISCONDUCT for which they did not even tackle or say anything about it to me.

Immediately I said I dnt want the “Father & Son” kinda settlement he went straight into a “booklet” of him claiming to be MISCONDUCTS by me which are ABSENTEEISM and NOT PREPARING LESSON NOTES(100% lies!!!)

He asked me a question and I told him I wasn’t invited to talk but rather I was invited to hear the so-called ALLEGED PROFESSIONAL MISCONDUCT.

He then “angrily” said….OKAY!!! IF THAT’S THE CASE! WE WILL SERVE YOU A LETTER!!! And WE WILL MAKE SURE THAT WE PUT ALL THESE MISCONDUCTS ABOUT YOU TO THE PUBLIC FOR EVERYONE TO SEE( I laughed!!!)

I laughed because I asked myself in my head that “between you people and I who can put things on social media fast?” I have large platform to expose your evil doings in a day.

lest I forget, they said I have absented myself from school for 54 working days and I have been “VERY WICKED” and a bad example in the teaching field since I don’t go to class to teach. (whoever sold this lies to him? the person has cheated him paa)

If they claim I have absented myself for that number of days,why didn’t they “punish” me until today?

ME? A bad example in the teaching field?

ME? a “WICKED” person to the kids?

ME? That gave my school 10 computers through Zoroking?

ME? That used my own money to tile the floor of the whole nursery class?

ME? That used my money to tile where they sit to eat?

ME? That painted the whole 4 unit KG black including inside and Made artist design inside each class with cartoons to make the place lively and fun to learn?(with my own money)

ME? That has provided Uniforms to each school in the district? (with my own money & some support for which I don’t seek anymore cos how I planned it didn’t go that way)

ME? That sew uniforms for school every month with my own money?

SO…..After “ranting” and trying to raise his voice to intimidate and “tame” and it didn’t work,he then said,the meeting is over and I should leave!!! Ending it with that,they will serve me another letter. Allah hu Akbar”