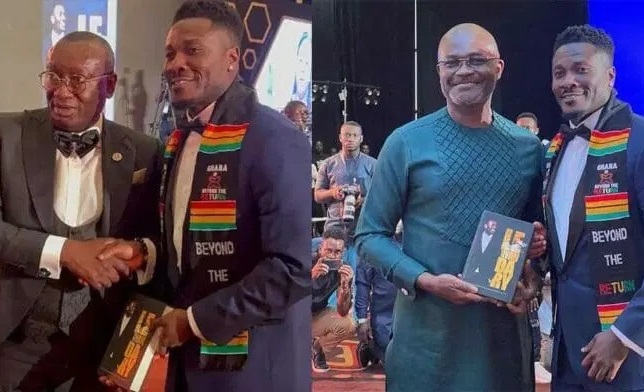 Former Black Stars captain, Asamoah Gyan finally got to launch his book titled ‘LeGendary’ at the Kempinski Hotel in Accra on Saturday, April 30.

This launch follows weeks of tireless work to make sure that nothing went wrong on the big night of the player who is currently Africa’s highest goal scorer at the FIFA World Cup.

At the launch of the book was Ghana’s President, His Excellency Nana Akufo Addo who was the special guest of honor.

Also in attendance were lawmakers, business moguls, current and former football stars, top entertainment and media personalities, and a host of many other prominent people.

Among the many guests who were in attendance, the Chief Executive Officer for Special Group of Companies producers of Special Ice Mineral Water, Dr. Ernest Ofori Sarpong was the first person who bought a copy of Asamoah Gyan’s book for a whopping Ghc100,000.

The Assin Central Member of Parliament, Kennedy Agyapong also bought the second copy of the book at the same price as Dr. Sarpong in their bid to show their love and support to him.

Asamoah Gyan Gifted With One Of The Limited Editions Of ‘Europe...