Wedding Photos Of Dr. UN And Joyce Dzidzor Mensah Cause Stir As They Surface Online 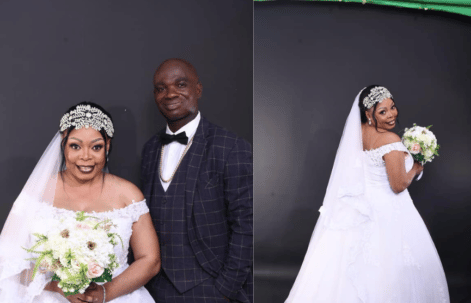 Former HIV/AIDS ambassador, Joyce Dzidzor Mensah and Dr. UN have released some photos purported to be from their secret wedding on social media.

The photos were first sighted on the Facebook page of Joyce Mensah, who was thanking God after a successful marriage ceremony.

Sharing the photos online, the caption she added was “All photos from my wedding yesterday.. I thank God for blessing me with a loving husband.”

Well, the photos have been causing a lot of stir and it is very obvious that was all the two intended.

READ ALSO: Oboy CJ Gets An iPhone From Sarkodie (Video)

There is no denying the fact that both personalities involved in this drama are social media sensations who enjoy the attention of the media either for the right reasons or the wrong ones.

Anyways, our checks have shown that it is just a movie they are currently working on and not a real wedding as Joyce suggests.

Dr UN Apologizes To Ghanaians After He Bragged At A Drinking...