Yaw Berk And Mother Kneels To Beg Kaywa For Forgiveness As Rev. Danso Abbeam Intervenes To Bring Back “Father And Son” 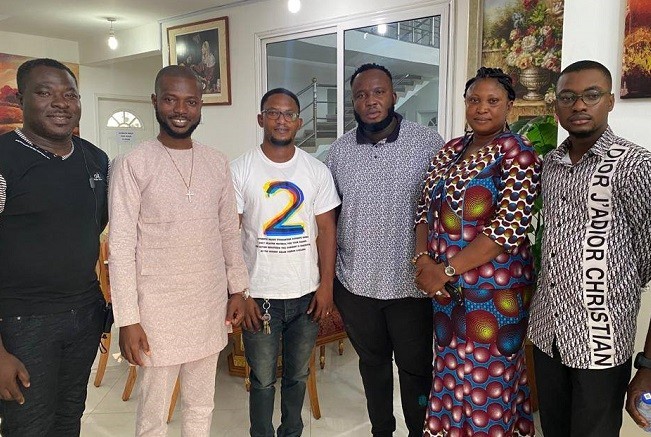 Young Ghanaian musician, Yaw Berk and his mother have apologized to Kaywa after he disrespected him some years ago.

He made certain remarks which were demeaning before they parted ways.

If you would recall, Yaw Berk stated that he was not managed well after he was signed on Kaywa’s Highly Spiritual Music.

Again, he claimed that Kawya’s studio was infested with bedbugs.

Few years down the line, he apologized to his former boss after he realized his mistake.

Kaywa reacted to his apology some months ago that he has forgiven him—however, he seemed unready to work with him anymore.

Following this, Yaw Berk, his mother and others have met with Kaywa and rendered a personal apology to him.

Zionfelix.net has gathered that Yaw Berk, his mother and others went on their knees when begging Kaywa to forgive him.

A renowned man of God, Rev. Danso Abbeam intervened by hosting both parties at his office.

Kaywa reiterated that he has forgiven Yaw Berk.

He further advised him to be diligent henceforth—because that will help him as he is growing.

My Trassaco Rent Issue Is Not True – Yaw Berk Makes...