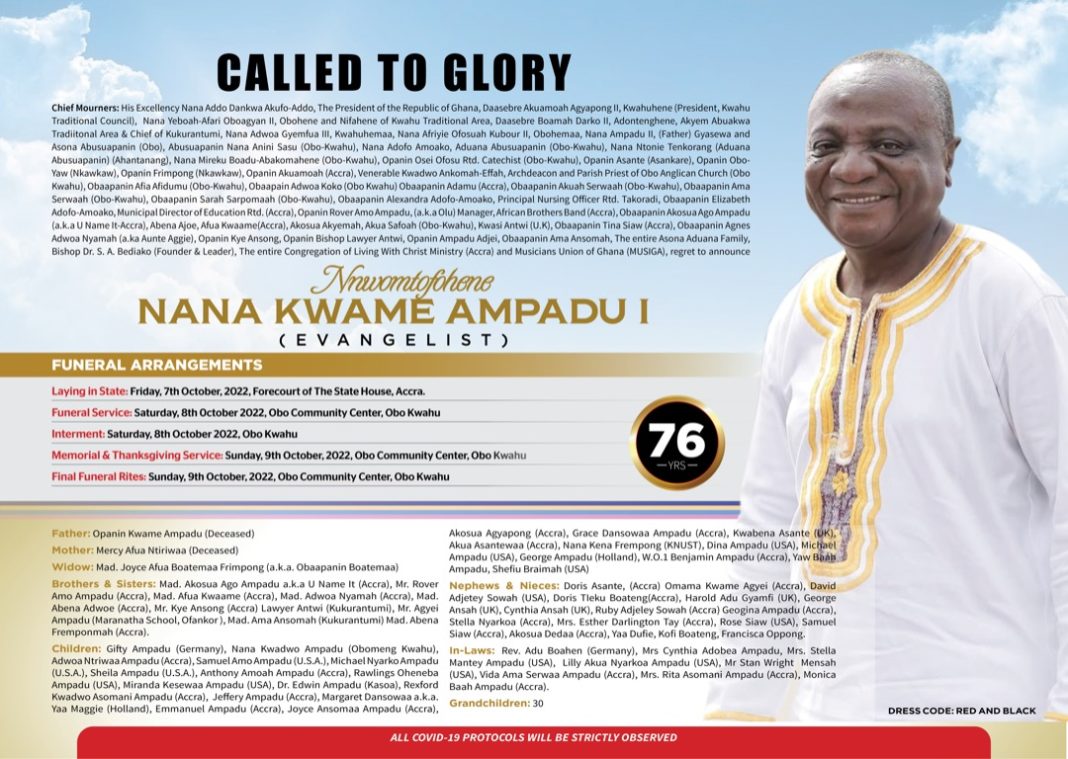 The funeral for legendary highlife musician, Nana Kwame Ampadu, started on Thursday, October 6, 2022, with a vigil at the forecourt of the State House in Accra.

After that successful vigil service in honour of the legendary musician, he was laid in state for viewing and filing past earlier today, Friday, October 7, 2022, at the forecourt of the State House.

From report zionfelix.net has gathered, the remains of Nana Ampadu who is also known as the king of highlife will be taken to his hometown at Obo Kwahu in the Eastern Region on Saturday, October 8, 2022, for interment.

A lot of top stars have come out today to show their final respect to Nana Ampadu at the forecast of the State House.

From videos that have surfaced online, a lot of musicians, actors, and other respected people from different spheres of life have been seen at the ceremony.

Nana Kwame Ampadu passed on at the age of 76 on Tuesday, September 28, 2021, after he was admitted to the Intensive Care Unit of the University of Ghana Medical Centre (UGMC) in Accra.

On Thursday, November 11, 2021, Nana Akufo-Addo, announced his decision to honour the late legendary Ghanaian highlife musician, Nana Kwame Ampadu, with a state-assisted burial for his contribution to the growth of the Ghanaian music industry.

The Director of Communications for the Presidency, Eugene Arhin, made the announcement during a Jubilee House Press briefing.

Nana Ampadu was one time President of MUSIGA and was also the leader of the African Brothers Band, formed in 1963.

The legendary highlife musician has been credited with several popular highlife tracks.

He is known to have composed over 800 songs.

He came to prominence in 1967 when he released his song Ebi Te Yie (“Some Are Well Seated”), a song that was seen as critical of the then-governing National Liberation Council (NLC) which toppled Ghana’s first president, Kwame Nkrumah.

The song disappeared from the airwaves, only returning after the end of military rule.

In 1973, he won a nationwide competition in Ghana and was crowned the “Adwontofoohene,” or King of Singers.