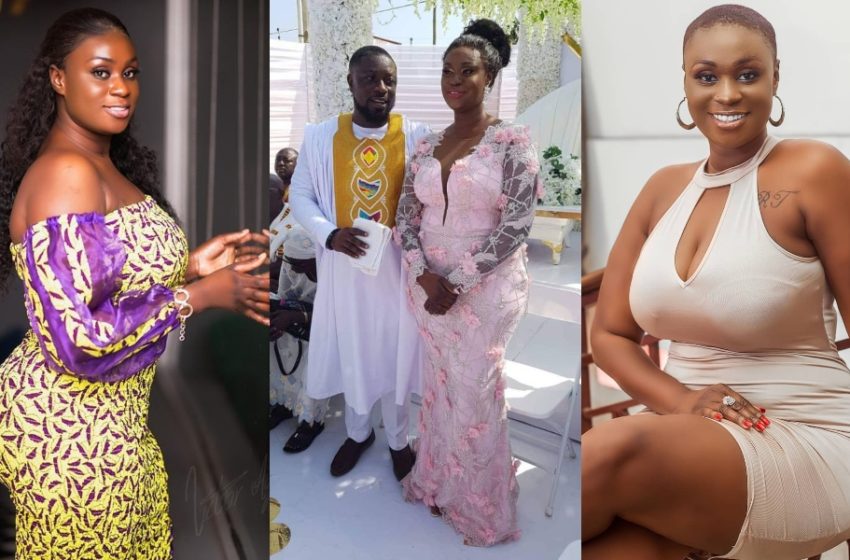 Actress Bibi Bright and her husband, Kwesi, have put the matter of their recent cheating and imminent divorce rumors to bed with a recent video of them together.

The married couple were seen at a location in Elmina believed to be a resort where they were going to spend some quality time together along with some other people.

Bibi who was doing an Instagram Live session was responding to a question posed to her by a fan who asked if she was still with her husband.

The actress then invited her husband into her Live session and they addressed the issue of reports that claimed she caught her husband in bed with another actress.

While making fun about the kind of bed he was caught on, Bibi’s husband said he was caught with the supposed lady on the bed meant for newborn babies.

The two continued to make fun of the viral reports and implied that they had nt broken up nor had she caught her hubby in bed with anyone or any actress for that matter.

The video has confirmed that the duo are still happily married to each other and are having the best time of their lives currently.

It was earlier reported that Bibi Bright had walked in on her husband having an affair. The supposed reports claimed that the husband of the actress was ‘caught’ in bed with a colleague actress of his wife.

The reports went on to add that the actress was filing for divorce following the incident.

Divorce Is Never A Sin So Don’t...

I’ll Campaign For Akufo Addo Over And...

I’ll Not Give Birth Again, My Last...

Check Out All The Beautiful Photos Of...