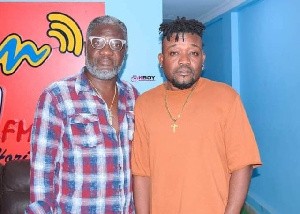 Nana Opoku Kwarteng, the father of late Ghanaian musician, Ebony Reigns has reacted to the release of her latest song.

Speaking in an interview monitored by Zionfelix.net on Agyenkwa FM in Kumasi, Nana Opoku Kwarteng told B Ice that Bullet informed him about the song before it was released.

Nana Opoku, otherwise known as Starboy Kwarteng, stated that Bullet said he wrote this song with Ebony before her demise.

He reiterated that Bullet gave him a couple of Ebony’s songs.

Nana Opoku Kwarteng explained that Bullet, the CEO of Rufftown Records still have copies of songs he wrote together with Ebony Reigns.

He added that he accepted Bullet’s permission to release the song after he sought it from him.

The father of the late Ebony Reigns was not ready to release the songs of her daughter with Rufftown Records.

When asked if he would allow Bullet to release any other song of Ebony, Nana Opoku Kwarteng answered, “Time will tell.”

Wendy Shay Teases Fans With Her Tundra As She Flaunts Her...